Gravity or gravitational force is a type of natural phenomenon. It’s a phenomenon by which all things with energy or mass— even including galaxies, stars, planets, and even light—are brought toward one another. On Earth, Gravity is the cause which gives weight to physical objects. The Moon’s gravity causes the ocean tides. In the Universe, the presence of gravitational attraction of the original gaseous matter begins coalescing and forming stars. This caused the stars to group together into galaxies. So one can understand gravity is responsible for many of the large-scale structures in the Universe. 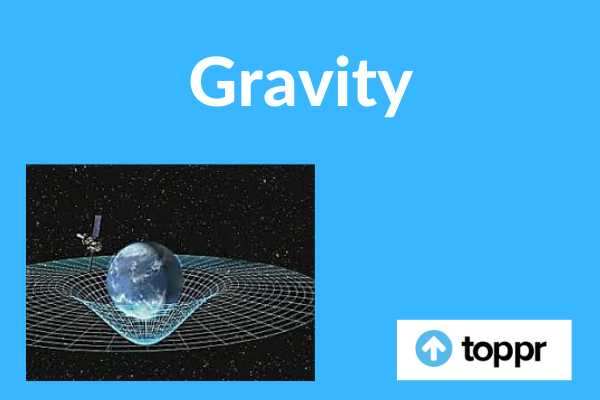 As proposed by Albert Einstein in 1915, Gravity is most appropriately described by the general theory of relativity. It describes gravity is not merely a force, but as a consequence of masses moving “straight-ahead” in a curved spacetime caused by the uneven distribution of mass. Blackhole is the most extreme example of this curvature of spacetime. From the black hole, nothing—not even light—can escape once past the black hole’s event horizon.

Newton’s law of universal gravitation is important in explaining Gravity. The law states that in the universe every particle attracts every other with such a force that is “directly proportional to the product of their masses and inversely proportional to the square of the distance between their centres”.

The Gravity of Earth

We denote the gravity of Earth by alphabet g. It the net increase in speed that is imparted to objects due to the combined effect of gravitation (from mass distribution within Earth) and the centrifugal force (from the Earth’s rotation). In SI unit system, we measure this g or acceleration in metres per second squared (in symbols,       \(\frac{m}{s^{2}}\) or \(m.s^{-2}\)) or equivalently in newtons per kilogram (\(\frac{N}{kg} or N.kg^{-1}\)). Near the Earth’s surface, the gravitational acceleration near is approximately 9.81 \(\frac{m}{s^{2}}\). Newton’s second law of motion, states that the weight of an object on the Earth’s surface is the downwards force on that object. We denote it by F = ma (force = mass × acceleration).

The application of Newton’s law of gravity in astronomical science has opened the detailed information, now we have about the planets in the Solar System. It includes information about the mass of the Sun, and details of Quasi Stellar radio sources, abbreviated as QUASARS. Newton’s law of gravity even infers the existence of dark matter. The gravity force exerted on one object by another is directly proportional to the product of those objects’ masses and inversely proportional to the square of the distance between them.

Artificial gravity (sometimes mentioned as pseudo gravity) is that the creation of an inertial force that mimics the consequences of gravity, usually by rotation. In a more general sense, “artificial gravity” can also ask the effect of linear acceleration, e.g. by means of a rocket engine.

Anti-gravity means without gravity or a non-gravitational field. It is actually a hypothetical phenomenon of making an area or object that’s free from the force of gravity. Anti-gravity may be a recurring concept in fantasy, particularly within the context of spacecraft propulsion.

General relativity predicts that energy is often transported out of a system through gravitational radiation. Any accelerating matter can create curvatures within the space-time metric. This is how the gravitational radiation is transported far away from the system. Co-orbiting objects can generate curvatures in space-time like the Earth-Sun system, pairs of neutron stars, and pairs of black holes.

In December 2012, a search team in China announced that it had produced measurements of the phase lag of Earth tides during full and new moons. These seem to prove that the speed of gravity is adequate to the speed of sunshine. This suggests that if the Sun suddenly disappeared, the world would keep orbiting it normally for 8 minutes, which is that the time light takes to travel that distance.

The team’s findings were released within the Chinese Science Bulletin in February 2013. In October 2017, the LIGO and Virgo detectors received gravitational wave signals within 2 seconds of gamma radiation satellites and optical telescopes seeing signals from an equivalent direction. This confirmed that the speed of gravitational waves is equivalent to the speed of light.

There are some observations that are not sufficiently accounted for. Thus, they may point to the need for better theories of gravity.

1) What is gravity according to Einstein?

Answer- Einstein’s general theory of relativity explains gravity as a distortion of space (or more precisely, spacetime) caused by the presence of matter or energy. A massive object generates a field by warping the geometry of the encompassing spacetime.

2) Why is gravity not a force?

Answer- Gravity is not a force. The best way to describe it is by the general theory of relativity. It describes gravity not as a force, but as a consequence of masses moving “straight-ahead” during a curved spacetime caused by the uneven distribution of mass.

3) How did gravity begin?

Answer- The legend is that Newton discovered Gravity when he saw a falling apple while brooding about the forces of nature. Whatever really happened, Newton realized that some force must be working on falling objects like apples.  Because otherwise, they might not start moving from rest.