Force is the push and pulls action and it results in the change of motion and direction. On the other hand, the pressure is the physical force applied to the unit area of the surface. Force is the effect produced due to the interaction of two objects which tries to change the state of the object. And the pressure is the force acting on an object in the perpendicular direction to the surface of the object. The pressure spreads over a certain area. Thus, if force is applied over a larger area, then obviously pressure will below. Similarly, if the same force is applied to a smaller area then the resulting pressure will be high. This article will explain the difference between force and pressure in a detailed way.

What is a Force?

A force is the push or pulls upon an object. It results from the object’s interaction with another object. Whenever there is some interaction between the objects, then there will be a force upon each of the objects. So, in lack of interaction, objects no longer experience the force. It is a vector quantity and hence has a specific direction of action with the magnitude. Therefore for a complete description, we have to describe both the magnitude and the direction. Due to being vector quantity, in diagrams force is represented by an arrow. SI unit of force is Newton or kg meter per second square.

The pressure is the physical force applied on an object in the perpendicular direction to the surface on its unit area. Its basic formula is dividing the force by the area of the surface. Its unit of measurement is Pascal (Pa). Pressure exists in various forms in nature and our surroundings. The main types of pressures are Absolute, Atmospheric, Differential, and Gauge Pressure.

In our daily life, we may easily find many phenomena that are related to pressure. For example, while sipping beverages from a straw, we actually suck the air out of the straw. And while we sip the beverage, we are actually applying the pressure. The SI unit for pressure is the pascal or Newton per square meter. Some other units are also there like pounds per square inch and bar etc.

Difference Between Force and Pressure 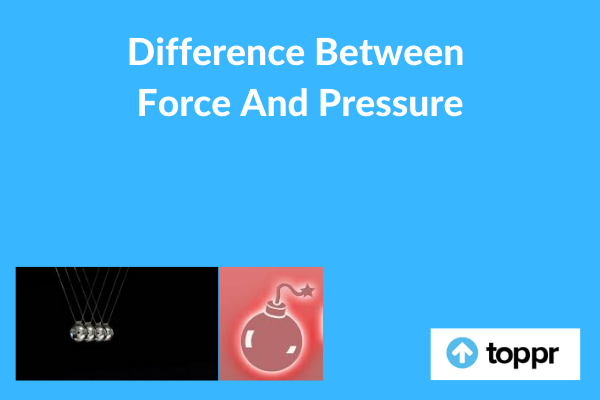 Difference between Force and Pressure

The important difference between force and pressure

Some more information about force and pressure:

FAQs about force and pressure:

Q.1: Why do forces exist in nature?

Solution: Force exists in nature because of the interaction of an object with another object. The application of the force on a body will change the motion of the object. This force exists because of energy, which may be either attraction energy or repulsive energy.

Q.2: What is the name of the instrument for measuring the atmospheric pressure?

Solution: Barometer is the instrument useful for measuring the atmospheric pressure.

Q.3: What kind of force is electrostatic force?

Solution: It is of the type of non-contact force.