The motion of any particle in a circular path refers to “circular motion.” A body is said to be in circular motion if it moves in a manner that the distance from a particular fixed point always remains same. In this topic, we will learn about the dynamics of circular motion with its application.

It is very important to understand two basic forces while learning circular motion. They are the centripetal force and centrifugal force. These two forces form the foundation of circular motion.

If a particles move with a uniform speed of V on any given circular path having the radius (r), the particle will have a centripetal acceleration of magnitude (v2/r). However, the direction continuously changes and always maintains its position towards the circle. We know according to the second law of Newton, the acceleration is produced by the force in the same direction as that of the force. Refer to the diagram below 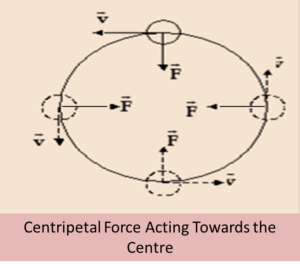 Applications of Centripetal Force in Our Daily Lives

Another very common example is the movement of the earth around the sun. Centripetal force plays a major role in this phenomenon. The force is provided by the gravitation attraction of our planet Earth due to the sun. The same thing happens when the moon is revolving around the earth due to the centripetal force occurring by the gravitational attraction imparted by the Earth on the moon.

The Motion of a Car

Circular Motion on a Level Road

Refer to the diagram below to observe the motion of a car on a level road. Primarily, three forces are acting on the car. They are 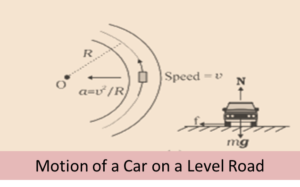 In the diagram, it is clear that the vertical direction does not have any acceleration.

Therefore, the centripetal force needed is present along the surface of the road the car is moving. The production of the force is possible by the component of the contact force occurring between the car tyres moving along the surface of the road. This force is nothing but the frictional force. In this example the friction is static that is providing the centripetal acceleration.

This static friction is responsible for opposing the impending motion of the car that is moving farther from the circle. Using the equation of law of static friction (fs ≤ µs N) and fc= mv2/R, we will get the result

The result does not depend upon the mass of the car. Therefore, it is very clear that for any value of R and µs, a maximum speed of circular motion of a moving car can be possible (gravitational force on the planet due to the sun).

Now, if a car is taking a circular turn in a particular horizontal road surface, the centripetal force will be the frictional force. The circular motion of any car in either a flat or a banked road provides interesting applications of the laws of motion. This equation can be written as

Circular Motion on a Banked Road

It is possible to decrease the contribution of the friction to the circular motion of a car moving in the road provided the road is banked. Refer to the diagram below.

We know that the net force in the vertical direction is zero because of no acceleration. Hence we can write the equation as

Thus, the centripetal force is due to the horizontal components of N and f. Thus we can write the equation as

So if we want to find out Vmax, we will use the above equation (f = µsN)

Hence, the equation 1 and 2 will become

Thus, using equation 4 we get,

Substitution of N in equation 5 will form the equation, 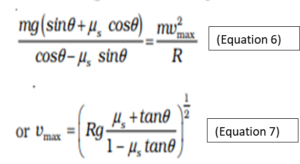 We will observe the maximum possible speed on a banked road is more than the flat road. For µs = 0,

In the above equation of speed, frictional force will not be required at all to produce the necessary centripetal force. Moreover, driving at this speed will not result in any wear and tear of the tyres. This equation also indicates that v < vo. Hence, the frictional force will be present up in the slope and the car can be possibly parked if tan θ ≤ µs.

Now we know that acceleration and circular motion is associated. Thus any rotating frame can represent an accelerating frame. Thus, it refers to the non-inertial reference frame. However, Newton’s law does not necessarily apply to such frames. Such as in case of the linearly accelerated reference frame with acceleration required a pseudo force

Solution: Let’s look a the diagram, 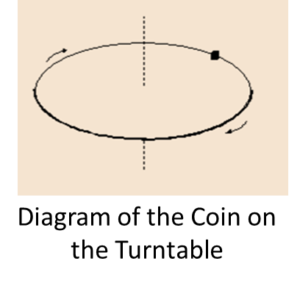 The free body diagram (FBD) of the coin will be, 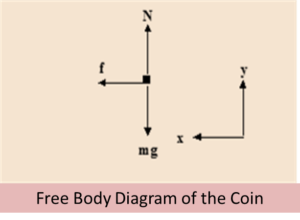 The acceleration is towards the centre. Thus, we select the +x axis in the direction of acceleration. The required centripetal force is given by the frictional force (f). This is obviously static friction as the coin is not slipping in the table. Applying Newton’s second law

Putting the given values