When you are trying to solve a problem in mechanics, it is important to remember that you can choose any part of the assembly and apply the laws of motion to that part. All you need to ensure is that you account for all forces acting on the ‘chosen part’ due to the remaining parts of the assembly. For the sake of simplicity, we call the chosen part of an assembly as the ‘system’ and the remaining part as the ‘environment’.

Steps for Solving Problems in Mechanics

These steps will help you solve the problems in a systematic manner:

Let’s look at an example to understand these steps:

A wooden block of mass 2 kg rests on a soft horizontal floor as shown in the figure below. When an iron cylinder of mass 25 kg is placed on top of the block, the floor yields steadily and the block and the cylinder together go down with an acceleration of 0.1 m/s2. What is the action of the block on the floor (a) before and (b) after the floor yields? Take g = 10 m/s2. Identify the action-reaction pairs in the problem. 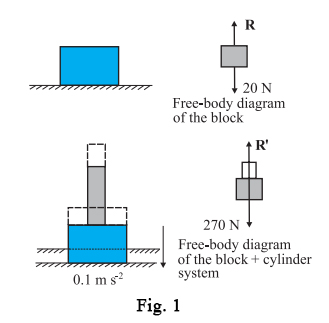 a. The block is at rest on the floor.

According to Newton’s First Law, the normal force R = – 20N. Also, as per the Third Law, the action of the block or the force exerted by the block on the floor is 20N and is directed downwards.

b. The system (block + cylinder) accelerates downwards with 0.1 m/s2.

When the system of the block and cylinder accelerates downwards, there are two forces on the system; the gravitational force [ (25 + 2) x 10 = 270N] and the normal force R’ by the floor. Internal forces between the block and the cylinder are not taken into consideration. Applying per the Second Law of motion, we get

Hence, according to the third law, the action of the system on the floor is equal to 267.3 N vertically downward.

Before the floor yields –

After the floor yields –

Since the object is at rest, these forces happen to be equal and opposite. In the example above, you can observe that while the weight of the system is 270N, the normal force is only 267.3N. Practice drawing free-body diagrams as they can really help in solving problems in mechanics.

Q1. A block of mass 25 kg is raised by a 50 kg man in two different ways as shown in the figure below. What is the action on the floor by the man in the two cases? If the floor yields to a normal force of 700 N, which mode should the man adopt to lift the block without the floor yielding. Solution: We know that,

Case a: The man lifts the block directly

In this case, since the man applies force in the upward direction, it increases his apparent weight on the floor. Therefore,

Case b: The man uses a pulley to lift the block

In this case, since the man applies the force in the downward direction, his apparent weight on the floor decreases. Therefore,

If the floor yields to a normal force of 700N, then the man should use the pulley to lift the block to ensure that the floor does not yield.