For centuries physicists have been trying to understand the mechanics of nature and the things around us. Aristotle, the famous Greek thinker, had formulated certain ideas of motion. Eventually, Galileo came up with the idea of inertia which proved Aristotle’s mechanics wrong. Physicist Isaac Newton built on Galileo’s ideas to create the famous three laws of motion called Newtons laws of motion. In this article, we will look at these Newtons laws in detail.

Newton’s first law of motion is based on Galileo’s law of inertia. Galileo had observed that a body does not change its current state (of rest or uniform motion) unless an external unbalanced force compels it to do so. Based on this, Newton’s First Law of motion states:

“A body continues to be in its state of rest or of uniform motion in a straight line unless compelled by some external force to act otherwise.”

Whether a body is in a state of rest or uniform motion, the acceleration is zero. Hence, Newton’s First Law can also be written as:

There are two scenarios to consider:

Case I. Net external force on a body is zero

If we know that the net external force on a body is zero, then we can conclude that it has zero acceleration.

Imagine a spaceship in space, away from all other objects and its rockets turned off. In space, there are no external forces acting on it. Hence, by Newton’s First Law, the spaceship’s acceleration is zero. So, if it is in motion, then it will continue to move with a uniform velocity. 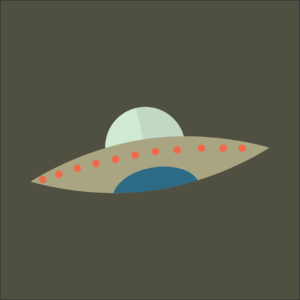 Case II. We don’t know if the net external force is zero but the body is un-accelerated

It is very difficult to understand all the forces that act on a body at a given time. However, if we know that the body is either at rest or in uniform linear motion (un-accelerated), then we can conclude that the net external force acting on the body is zero.

On Earth, gravity affects all bodies. Also, bodies in motion can experience friction, viscous drag, etc.  So, if a body is at rest or in a state of uniform linear motion on earth, then it is because the different external forces acting on it add up to zero.

Imagine a book at rest on a horizontal table as shown below:

There are two external forces acting on this book:

We are not aware of all the forces acting on the book but we know that it is at rest. Therefore, using Newton’s First Law, we can conclude that R is equal to W. Hence, we state: ‘According to Newton’s First Law of motion since the book is at rest, the net external force acting on it must be zero. Hence, the normal force is equal and opposite to the weight (W).

Before we look at the first law, let’s understand the concept of Momentum.

The momentum of a body is the product of its mass and velocity.

where p = momentum, m = mass of the body, and v = velocity of the body. Momentum is a vector quantity; it is direction dependent. It is an important quantity in the study of the effect of force on the motion. Here are some examples:

If we take these two examples together, then we can conclude that the mass and speed are relevant variables of motion.

An observation worth noting is that if you apply the same force to two bodies having different masses, then the lighter body will pick up more speed initially but eventually both the bodies will acquire the same momentum. 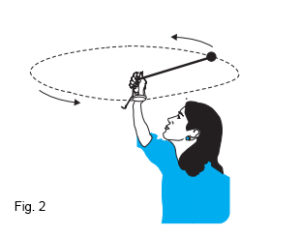 Based on these observations, Newton formulated the Second Law of Motion:

“The rate of change of momentum of a body is directly proportional to the applied force and takes place in the direction in which the force acts.”

This law is represented by the equation F = kma, where F is the net external force acting on a body, k is the constant of proportionality, m is the mass of the object, and a is the acceleration. In the SI system, one unit force is one that causes an acceleration of 1 m/s2 to a mass of 1 kg. This unit is called Newton. Therefore, 1N = 1 kg m/s2.

According to Newton, force can never occur singly in nature; it is the mutual interaction between two bodies. This formed the basis of Newton’s Third Law of motion which states:

“To every action, there is always an equal and opposite reaction.”

Here are some points to remember about the Third Law:

Now let’s looks at some more examples on Newtons Laws studied above.

Q1. Give the magnitude and direction of the net force acting on:

This concludes our discussion on the topic Newtons Laws of Motion.