What is the difference between two indistinguishable objects going at various velocities? Almost everybody realizes that the one moving quicker i.e. the one with the more prominent speed. One of them will go farther than the one moving slower in a similar measure of time. Either that or they’ll reveal to you that one moving quicker will get where it is moving sooner than the slower one. Whatever speed is, it includes both separation and time. “faster” signifies either “farther”. It’s more distance or “sooner”. All of these depends on the velocity of an object. 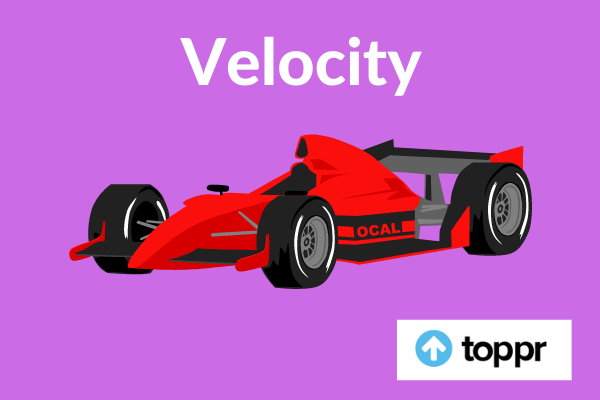 The velocity of an object is the pace of progress of its situation as for an edge of reference. It is a component of time. Velocity is equal to the determination of an object’s speed and direction of movement. For example, 60 km/h toward the north. Velocity is a crucial idea in kinematics. The part of classical mechanics depicts the movement of bodies.

Velocity is a vector quantity. Both magnitude and direction are expected to characterize it. The scalar supreme value (size) of velocity is called speed. Being a reasonably inferred unit, whose amount is estimated in the SI (decimal standard) as meters every second (m/s). The SI base unit of velocity is (m⋅s−1). For instance, “5 meters for each second” is a scalar, though “5 meters for every second in the east” is a vector. If there is an adjustment in velocity, direction or both, at that point the object has a changing velocity. It is supposed to go through an increasing speed.

Velocity is the pace of progress of position concerning time. It may likewise be alluded to prompt velocity to stress the differentiation from the vector velocity. In certain applications, the average velocity of an object may be required. In other words, the steady velocity that would give a similar resultant removal as a variable speed in a similar time. v(t) is some time-frame, \(\Delta t\). We can determine the average velocity as:

On the off chance that we think about v as velocity and x as the displacement (change in position) vector. At that point we can communicate the (momentary) velocity of a molecule or an object. At a specific time, i.e. t. It is the subordinate derivative of the position as for time:

Since the derivative of the position with respect to time gives the change in position divided by the change in time. Velocity is calculated in metres per second. For an instantaneous velocity at first seem counter-intuitive at some. It may be thought of as the velocity that the object might continue to travel in a direction at if it stopped accelerating at that moment.

The majority of us frequently get confused by the terms speed and velocity. As the ideas of both of these terms rotate around how quick something is moving. Indeed, in spite of the fact that the ideas are somewhat comparable. These terms are very not quite the same as one another. The fundamental contrast in the midst of speed and velocity is that the speed gives a thought of how quick the body is moving, while velocity not just gives the possibility of the body’s speed yet additionally tells the direction where it is moving. Speed is identified with the distance we travel.

For instance, a vehicle moving at a constant 20 kilometres for each hour in a round way has a constant speed. However, doesn’t have a constant velocity since its direction changes. Thus, the vehicle is viewed as going through an acceleration.

Relative velocity is an estimation of velocity between two objects as decided in a solitary arrange framework. It is key in both the old style and current material science. Since numerous frameworks in material science manage the overall movement of at least two particles. In Newtonian mechanics, the general velocity is autonomous of the picked inertial reference outline. This isn’t the case any longer with unique relativity where speeds rely upon the decision of reference outline.

Q.1. Can velocity be negative?

Q.2. How is speed different from velocity?

Answer: Speed and velocity are kinematic quantities that have unmistakably various definitions. Speed, a scalar quantity, is the rate at which an object covers distance. The average speed is the distance (a scalar quantity) per time proportion. Speed is oblivious of bearing. Then again, Velocity is a vector quantity. It is h. Speed is the rate at which the position changes. The average velocity is displacement or position change i.e. a vector quantity per time proportion.

Velocity is characterized as a vector estimation of the rate and direction of movement. Set forth plainly, Velocity is the speed at which something moves a single way. Like, the speed of a vehicle voyaging north on a significant turnpike. The speed a rocket dispatching into space is estimated using speed.

The most well-known approach to ascertain the consistent velocity of an object moving in an orderly fashion is with this formula: