Have you ever seen a stream passing under the bridge? What do you first observe when you see a streamline? The answer is the most common characteristics of the stream such as speed, width, amount of water flowing etc. One of the primary characteristics of any stream is its flow. We refer to it as streamflow.

Streamflow is the characteristics that determine how the water of the stream will move in a stream channel. Streamflow can either be streamline/laminar flow or turbulent flow. In this topic, we will study the concept of streamline flow.

You might have seen streams come in different size, shape, etc. Moreover, they are also different from each other in speed and the flow direction. This topic will help you to understand one of a primary way of flow.

An important factor that influences the flow of water within streams is the location or source of the stream. Different sources include rainfall, the ground below the stream or even melting snow. The source location of the stream has the potential to influence the speed of the water as well as the manner of flow within the stream.

Streamline flow in case of fluids is referred to as the type of flow where the fluids flow in separate layers without mixing or disruption occurring in between the layers at a particular point. The velocity of each fluid particle flowing will remain constant with time in streamline flow.

In case of low fluid velocities, the fluid will flow without any sort of lateral mixing because of lack of turbulent velocity fluctuations. The fluid particles tend to follow a particular order where the movement or motion of fluid particles will be on the basis of particles flowing in a straight line parallel to the pipe wall. The movement happens in a way that the adjacent layers of the fluid will smoothly slide past each other.

Examples of Streamline and Turbulent Flows

We have mostly studied about fluids at rest but streamline flow is an example of fluids in motion. It is an important part of fluid dynamics (the study of fluids in motion). We have learned how opening a water tap slowly is responsible for the smooth flowing of water. But the smoothness is lost as we gradually keep on increasing the outflow speed.

Here we will focus on what will happen to the various fluid particles at a certain point in space at a particular time.

This means that at a different point the particle can have a different velocity. Steady flow signifies that each particle passing through the second point will behave the same as the previous fluid particle that has initially crossed that point. Therefore, under steady flow condition, the fluid particles will follow a smooth path that will not cross each other.

Hence, streamline is the path taken by fluid particles under the steady flow condition. In case of a streamline flow, the tangent drawn at any point of the curve (path) will be in direction of the velocity of the fluid at that point.

Below diagram represents a curve with tangents at different points. It describes how the particles present within a fluid moves with respect to time.

The diagram act as a permanent map to describe how the fluid flows during streamlines condition. Thus, no two streamlines can intermix or cross each other. Under steady flow, the map of the movement of fluid is stationary with respect to time. Hence, the continuum of lines will form if we try to describe the streamline flow of every particle.

Consider three parts (P, R, and Q) in planes that are present in the perpendicular direction to the fluid. Refer to the diagram below 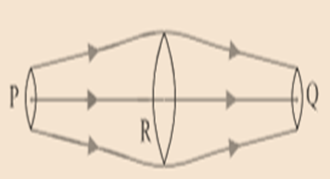 We will be able to determine the boundaries the selected points in the plane by the same set of the streamlines. Hence, the particles of fluid passing through the surfaces at the three-point P, R and Q will be the same. Now consider the area at the three points as AP, AR, and AQ. Consider the speed of the fluid particles as vP, vR, and vq.

In all the three cases, the mass of liquid flowing in and flowing will be equal. Therefore, we can write the equation as

If we consider the fluids as incompressible in nature then “ρP = ρR = ρQ“ will be equal. So the above equation can be rewritten as

The above equation is the equation of continuity. The equation also represents conservation of mass in case of the flow of the incompressible liquids.

where Av is the flow rate of the liquid or volume flux of the liquid. The flow rate in case of streamline flow remains constant throughout the flow of liquid through the pipe. Hence, the streamlines in narrower regions are present closely thereby resulting in the increase of velocity and vice versa.

From the above diagram, the area of R will be greater than Q. Thus velocity in the R will be less than Q. Thus, the fluid will increase in velocity while crossing from R to Q. Therefore, it is easy to acquire steady flow at low fluid flow speed. However, after reaching a particular speed, the flow will lose its steadiness and gradually tend to become turbulent.

This speed is called critical speed. The classic example of streamline flow to turbulent flow is the formation of white-water rapids when a fast-moving stream comes in contact with rocks.

Question: Mention the correct direction of streamline and equipotential line in a flow field

Solution: Option 3 (Perpendicular to each other)