Reynolds number is a dimensionless physical quantity. It is a very important entity in fluid mechanics. To predict flow patterns of different fluid flow systems, we calculate the Reynolds Number \(R_{e}\). The value of Reynolds number decides the nature of the flow. Higher numbers suggest turbulent flow and lower Reynolds numbers tend to be dominated by the laminar(sheet-like) flow. The difference between the fluid’s direction and the speed causes the turbulence. The direction and speed may sometimes intersect or counter the overall flow of the fluid. These are known as eddy currents. The flow of the fluids is churned by the eddy currents. These end up using energy in this process leading to a steep increase in the chances of cavitation. 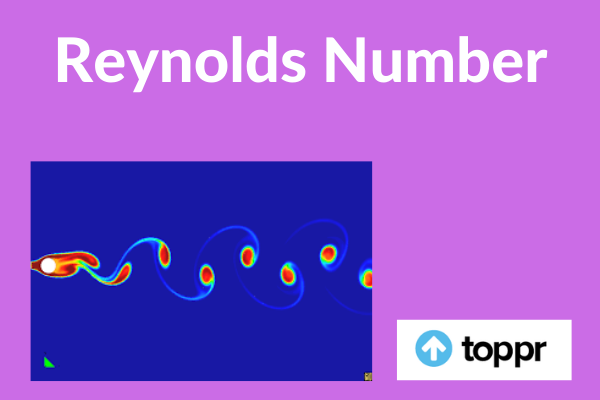 When a fluid experiences relative internal movement due to different fluid velocities, the Reynolds number is defined. It is the ratio of inertial forces to the viscous forces in a fluid. A term boundary layer is defined to describe the region where these forces change their behaviour. An example of a boundary layer would be the bounding surface in the interior of a pipe. The introduction of a high-velocity fluid into a low-velocity fluid causes a similar effect on the fluid. For example, the emission of hot gases from a flame in the air. The relative motion causes fluid friction, which is an important contributor to the turbulent flow.

The viscosity of the fluid actually counteracts this effect and inhibits turbulence. The Reynolds number guides us to the relative importance of inertial and viscous forces for given flow conditions. It indicates when the turbulent flow will occur in a particular situation.

L is a linear dimension

\(\mu\) denotes the dynamic viscosity of the fluid

\(\nu\) is the kinematic viscosity of the fluid

For laminar and turbulent flow understanding:

The Reynolds number can also be defined for various other situations where a fluid is in relative motion with a surface. These definitions are based on fluid properties like density and viscosity.

Osborne Reynolds is the scientist responsible for the studies of the conditions in which the flow of any fluid changes. He studied the transition of fluid in pipes from laminar to turbulent flow. A classical experiment performed by Reynolds in 1883 describes the behaviour of water flow under different flow velocities. This helps in examining the reason for the transition. The examination can be carried out by using a small stream of dyed water introduced in the middle of clear water flow in a larger pipe. The nature of the larger pipe is important as we need to observe the activities occurring inside. Thus, the larger pipe has to be made of glass.

A flow control valve is installed at the end of the pipe. This valve is used to control the water velocity inside the pipe. The dyed layer remains distinct throughout the entire length of the large tube when the velocity of water flowing inside the tube is low. As the velocity of water is increased, the layer of dyed stream breaks up at a given point. It begins to diffuse throughout the water’s cross-section. This point is the transition point. The transition point is the point when the fluid transits from laminar to turbulent flow.

This experiment is the source of a dimensionless physical quantity named the Reynolds number. This number is up for dynamic similarity which is the ratio of inertial forces to the viscous forces. Osborne Reynold is also responsible for suggesting what is now known as the Reynolds-averaging of the turbulent flows. Here, quantities like velocity are denoted as the summation of the mean and fluctuating components. This kind of averaging allows for the description of the turbulent flow as a bulk-like in the Navier-Stokes equation.

In the boundary layer flow as defined above, when the fluid flows over a flat plate. Experimentally, we infer that after a certain length of flow, a laminar boundary will become turbulent and unstable. Across different scales, the instability occurs in case of different fluids. Generally, this happens at

where x is the distance from the flat plate

and flow velocity is the velocity of the fluid

outside the boundary when freestream

The experimental calculations have led to us knowing for a pipe with a diameter D:

For a laminar flow, \(R_{e_{D}} <2300\) and for a turbulent flow, \(R_{e_{D}}>2900\). For a lower end of this range of values, there is a continuous turbulent flow at the farther end from the inlet of the pipe. The flow in the middle of the pipe starts to transition from laminar to turbulent and then back to laminar. This interconversion at irregular intervals is termed as intermittent flow. This happens because of the different speeds and conditions of the fluid in different areas of the cross-section of the pipe. This variation depends on the many factors such as the roughness of the pipe and the uniform flow.

In the fast-moving centre of the pipe, the laminar flow tends to dominate and in the slow-moving areas near the pipe, the dominant flow is turbulent. When the Reynolds number increases, the continuous turbulent flow tends to approach the inlet. Thus, the intermittency increases and finally the flow becomes fully turbulent. This outcome is applicable to all the non-circular channels by using a hydraulic diameter framing a transition Reynolds number.

Answer. There are wide applications of the Reynolds number. They can range from the passage of air over an aircraft wing, the propeller of a helicopter to the liquid flow in a small pipe. It predicts the transition of a flowing fluid from a laminar flow to a turbulent flow. It is also useful in the scaling of similar flows making them the desired different size flow situations. An example is a wind tunnel model of an aircraft that can be scaled to the full-size version. It is also helpful in predicting the local or global air and water movement and thus the related climatological and meteorological effects. This prediction is based on the ability to calculate scaling effects and the onset of turbulence.

Q.2. How do you describe the flow of a fluid in an open channel?

Q.3. How is pipe friction calculated?

Answer. Moody diagrams are used to predict the pressure drops in the fully developed flow of fluids through pipes. These diagrams are plots of Darcy-Weisbach friction factor vs Reynolds number. These plots clearly indicate the nature of the flow. The pipe flow is evidently dependent on the turbulent or laminar regimes.