We frequently see that our body feels lighter while taking a dip in the pool. Additionally, when drawing water from a well, the container feels lighter till it is somewhat or completely submerged in water. Have you ever asked why this adjustment in weight is felt? We can say when drenched in water or some other liquid, the body encounters a force from the downward direction to the course of the gravitational draw. It is liable for the abatement in its weight. It can be the motivation behind why a ball of plastic buoys in water instead of sinking to the base by its weight. However, here as well, we see that a few objects, for example, a plastic jug drift over water, while others, for example, a needle sink. This is a result of buoyancy and buoyant force. 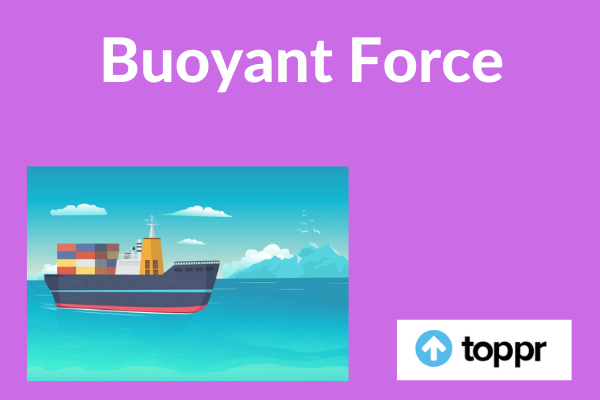 What is Buoyant Force?

At the point when an item is submerged in a fluid, it encounters an upward force known as Buoyant Force. This phenomenon of encountering an upward force is Buoyancy. Buoyancy is the force that makes objects skim. It is the force applied on an object that is halfway or completely drenched in a liquid. Buoyancy is brought about by the distinctions in weight following up on inverse sides of an item drenched in a static liquid. It is the otherwise buoyant force. Buoyancy is the wonders because of Buoyant Force.

The buoyant force is as an upward power applied by a liquid that restricts the heaviness of an item submerges in a liquid. As we probably are aware, the weight in liquid segment increments with profundity. Consequently, the weight at the lower part of an item lowered in the liquid is more noteworthy than that at the top. The distinction in this weight brings about a net upward force on the object which we characterize as buoyancy.

The unit of the buoyant force is the Newton (N).

G = the acceleration due to gravity

At the point when a body is in water, it dislodges some measure of water inferable from its weight. The measure of uprooted water is registered by the object’s density which identifies with volume. The volume of a cricket ball and volleyball can be equivalent to their distinctive weight but their density varies. The strong steel block dives in water however the steel transport doesn’t. Subsequently, the amount of dislodging water in the upward direction is regarding Buoyant force.

The density of a material is defined as its mass per unit volume. It’s a measurement of how tightly matter is packed together.

As the relative density is a ratio of the same quantities, it has no unit.

It is because of the buoyant force that human swimmers, fish, boats, and icy masses remain above water. A few utilizations of buoyancy are given in the focuses beneath.

A submarine has an enormous counterbalance tank, which is in use to control its position and profundity from the outside of the ocean. A submarine lowers by giving water access to the balance tank with the goal that its weight gets more prominent than the buoyant force.

A ship glides on the surface of the ocean in light of the fact that the volume of water dislodged by the ship. It is sufficient to have a weight equivalent to the heaviness of the boat. A boat is developed as it were with the goal that the shape is empty, to make the general density of the ship lesser than the ocean water. Subsequently, the buoyant force following up on the ship is sufficiently enormous to help its weight.

A specific gathering of fishes utilizes Archimedes’ rule to go here and there the water. To go up to the surface, the fishes will fill its swim bladder with gases. The gases diffuse from their own body to the bladder and accordingly making the body lighter. This empowers the fishes to go up.

An object whose density is more prominent than that of the liquid in which it is lowered will in general sink. In the event that the object is either less thick than the fluid or is formed properly (as in a boat), the force that can keep the object above water. Regarding relative thickness, if the overall thickness of a substance is short of what one it skims in water and substances with a relative thickness more prominent than the one sink in water.

Q.1. Why is buoyancy important in swimming?

Answer: The pressure applied by the liquid in which the object is submerged causes the buoyancy. Additionally, the buoyant force experienced by the item is in every case upwards on the grounds that the weight of the liquid increments with the profundity.

Q.3. What are the three types of buoyancy?

Positive buoyancy is the point at which the drenched article is lighter than the liquid uprooted and this is the motivation behind why the item skims.

Negative buoyancy is the point at which the submerged item is denser than the uprooted which brings about the sinking of the object.

Neutral buoyancy happens when the heaviness of inundated item is equivalent to the liquid uprooted Dive taken by the scuba jumper is an Ideal model for impartial buoyancy.