The Biot-Savart’s law gives the magnetic field produced due to a current carrying segment. This segment is taken as a vector quantity known as the current element.

Consider a wire carrying a current I in a specific direction as shown in the figure. Take a small element of the wire of length dl. The direction of this element is along that of the current so that it forms a vector Idl. If we want to know the magnetic field produced at a point due to this small element, then we can use the Biot-Savart’s Law.

The magnitude of the magnetic field dB at a distance r from a current carrying element dl is found to be proportional to I and to the length dl. And is inversely proportional to the square of the distance |r|. The direction of the Magnetic Field is perpendicular to the line element dl as well as radius r. 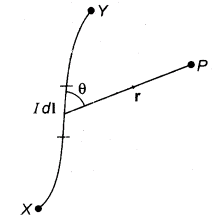 Learn more about the Magnetic Force and Magnetic Field.

Similarities And Differences Between Biot-Savart Law And Coulomb’s Law

Learn more about the Motion in Combined Electric and Magnetic Field.

Question: A circular coil is of 10 turns and radius 1m. If a current of 5A flows through it, calculate the field in the coil from a distance of 2m.

The Biot-Savart law formula is given by,