You may see objects, which when applied force to, show motion with certain restrictions. A door attached to a hinge will rotate around it, the cap of a bottle will turn around its threads, and so on. These motions are Rotational Motions that use the concept of torque. Without torque, there would be no twists and turns, no spins! Wouldn’t life be boring that way? Torque gives a rotational motion to an object that would otherwise not be possible.

Torque(τ) is the twisting force that tends to cause rotation. The axis of rotation is the point where the object rotates.

Where F – force applied and r – the distance between the centre of the axis of rotation and to the point where force is applied.

A magnetic dipole is the limit of either a closed loop of electric current or a pair of poles as the dimensions of the source are reduced to zero while keeping the magnetic moment constant. Now we shall show that a steady current I passing through a rectangular loop placed in a uniform magnetic field experiences a torque. It does not experience a net force. This behaviour is similar to the of an electric dipole in a uniform electric field. 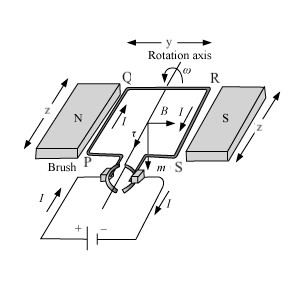 A rectangular current carrying coil in the magnetic field

Similarly, it exerts a force F2 on the arm RS and F2 is directed out of the plane of the paper.

Now let us consider a case when the plane of the loop is not along the magnetic field but makes an angle with it. And let us consider the angle between the field and the normal to the coil is angle Θ.

The forces on both the arms QR and SP are equal, opposite and act along the axis of the coil, which connects the centres of mass of QR and SP. Being collinear along the axis they cancel out each other, resulting in no net force or torque. The forces on arms PQ and RS are F1 and F2. Furthermore, they too are equal and opposite, with magnitude,

As they are not collinear it results in a couple. The effect of torque is, however, less than the earlier case when the plane of the loop was along the magnetic field. The magnitude of the torque on the loop is,

where A is the direction of the area vector. The angle between m and B is θ, the equations (1) and (2) can be expressed by one expression

where m is the magnetic moment and B is the uniform magnetic field.

Question: A pole of pole strength 80 Am is placed at a point at a distance 20cm on the equatorial line from the centre of a short magnet of magnetic moment 20Am2. Therefore the force experienced by it is