Python zip function returns a zip object that is an iterator of tuples. A tuple is a data type in Python that is used to store the collection of data in a single variable. These are enclosed with round brackets. The data stored in a tuple is ordered and mutable, that is, it can be changed once the tuple has been created. The data items stored in a tuple are separated by a comma (,).

zip () is a built-in function provided in Python. A function is a set of instructions that returns a value. A built-in function can be called anywhere in the code. Iterators in Python are objects that can be iterated. Thus, these objects return data upon iteration one at a time and can be called an iterator if you can receive an iterator from it. Thus, data types such as lists, strings, tuples, etc., are iterables.

Syntax of a Python zip 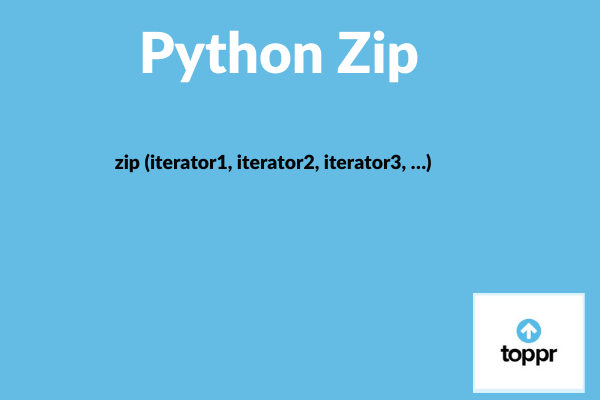 The Python zip function returns an iterator of tuples. The tuple is based on the objects that are iterated using the zip () function. Here are different cases of return values that one can obtain from a zip () function.

One thing to note here is that if, for example, two iterables are passed in a zip () function, and both the iterables have a different number of elements or are of different lengths, then the iterator returned will contain the least number of elements. That is, if one iterable contains 5 elements and another contains 3, then the tuple returned will have three elements. This happens because the iterator stops when the iterable with the least values is exhausted.

Notice that once all the three elements of the shortest iterable are exhausted, the zip () function stops returning values.

Example 3: A Python program that unzips the value using the zip function python

Answer: The Python zip () function is used to aggregate the iterables into one tuple.

2. Can you zip three lists in Python?

Answer: Yes, the zip () function can be used to aggregate multiple lists. Thus, three or more lists can be joined together and returned in the form of tuples with their elements iterated.

Answer: NumPy zip is the function that is used to zip, or join, variables together. It can iterate objects such as array, dictionary, string, list, etc.

Answer: To zip a file in Python, the following syntax is used.

Share with friends
Previous
Python ord ()
Next
Flow of Control