Then the additive inverse of X will be equal and opposite in sign to it. This means that this inverse of a negative number will be positive.

We should note that the additive inverse of 0 is 0. Because zero is the only real number, that is equal to its own additive inverse. It is also the one and only number for which the equation X = -X becomes true. 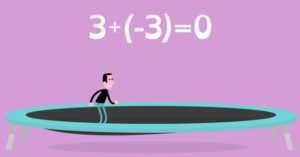 It has negative numbers to its left and the positive ones on the right side. Two number having opposite signs fall on either side of 0 at equal distance on the number line.

Once we locate the point corresponding to a number X on the number line. Then we are aware that the additive inverse, or the variable -X, will with respect to 0 on the opposite side of the number line.

For any number we can calculate it by multiplying it with -1: that results in –n = -1 X n. example of rings of the numbers are integers, real numbers, rational numbers, and complex numbers.

It is related closely to the subtraction. This can be seen as an addition to the opposite:

Conversely, it is also said to be a subtraction from zero.

Hence, unary minus sign notation is seen as a shorthand for subtraction with (0) symbol omitted. In correct typography, there should be no space present after unary (-).

In addition to the identities mentioned above, negation has algebraic properties that are as follows: