Have you ever noticed that whenever our elders gift us clothes and especially saris for our mothers, they gift silk? But why only silk? It is the most expensive fabric available and has a rich texture. What makes it so expensive? Where does it come from? Let’s find out more below.

Table of content
1 Suggested Videos
2 Silk and It’s Discovery
3 Life Cycle of Silkmoth
3.1 Cocoon to Silk
4 Sericulture and Silk Reeling
5 Question For You 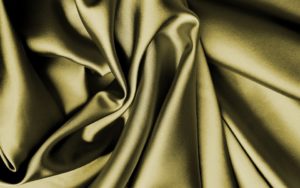 Silk is a beautifully constructed and texturally rich weaved fabric created with a three-tone tweed effect. Its made from a blend of three natural fibres namely, silk, flax, and wool. It is luxuriously soft and inherently flame retardant.

Silk originates from China, where silkworms have been cultivated for thousands of years to produce it. It is said that in 2640 BCE, the wife of Emperor Huang Di, Lei-Tzu was drinking hot tea under the shade of a mulberry tree when a cocoon fell from the tree directly in her cup. From there she started pulling it and discovered a long, delicate and iridescent filament. From this, she could make a thread by twisting the filaments together; these threads would be strong and soft.

She informed her husband about this discovery, who was amazed by it and he enthusiastically helped his wife to develop methods for raising silkworms, reeling silk thread and weaving the thread into fine fabric. For more than 2000 years the Chinese were able to keep their silk-making secret from the rest of the world creating a monopoly on its production.

Later about 400 CE, another Chinese princess is suspected to have smuggled some mulberry seeds and silkworm eggs in her headdress while she was on her way to marry an Indian prince, thereby allowing silk production in India. And only a few centuries later these secrets were revealed to Byzantium, France, Spain, and Italy.

Silkworms are actually not worms, instead, they’re larvae or caterpillars hatched from its eggs. 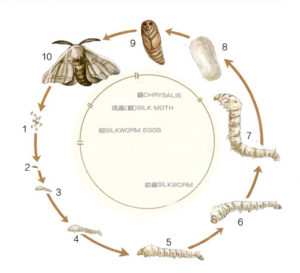 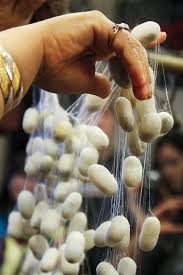 The production starts by collecting filaments from a mulberry silk moth’s cocoon. These cocoons are then dissolved in boiling water in order to extract the single strand of raw silk, washing and preparing the strands and then weaving or knitting the strands into the spinning reel to produce the fabric.

The rearing of silkworms for the production of raw silk is ‘sericulture’, which is also called as ‘silk farming’. Traditionally sericulture has been a secondary occupation among the parts of China, Thailand, India, etc.

Whereas, the process of reeling a number of cocoons together to produce a single thread is ‘silk reeling’. This is done by unwinding filaments collectively from the group of cooked cocoons at one end in a warm water bath and winding the thread resulting from it onto a fast-moving reel.

Q. Which of the following describes cocoons?

a. After 25 to 30 days of feeding, larvae spin a protective case around them

b. After 25 to 30 days of feeding, eggs spin a protective case around them

c. After 25 to 30 days of feeding, eggs hatch into larvae called cocoons.

d. After 3 to 5 months of feeding, larvae spin a protective case around them

Sol: a. After 25 to 30 days of feeding, larvae spin a protective case around them called cocoons.