History of fabrics in India 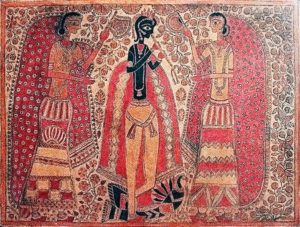 Cotton clothing was the most popular in India. It was India where cotton was first grown dating back as early as 5000 BC in the stone age. Men wore a cloth that was to be wrapped around their waists and knotted at the back which was and is known as ‘dhoti’. Often men would also wear turbans on their heads along with man-buns and kept their beards short or shaved.

For thousands of years, men kept on dressing like this. On the other hand, women wore short skirts, whose length went from waist to knees, and a cloth head wrap, to keep the sun off. Women also would often wear necklaces and bracelets, made of stone and shell beads, and as industrialization kicked in they wore jewellery made of bronze and silver and gold.

Variety of Fabrics in Vedic Period

As people approached the Vedic period, women wore only a cloth wrapped and pinned around themselves similar to the outfits worn by Iranian women or Greek women. Often women would also wear skirts wrapped and pleated around their waists and knotted in front, with a separate piece of fabric for a shawl or veil, and a tight shirt which was worn underneath. 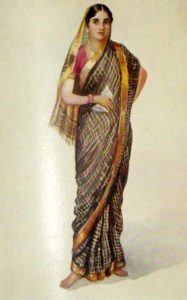 As the Guptan period approached in, about 500 AD, many women had shifted to wearing one very long piece of cloth – sari which they wrapped around themselves in different ways. The word sari comes from a Sanskrit word meaning cloth. The Vedas that were first written stories mention saris, about 600 BC. The women of elite class wore saris made of silk from China, and most women who were commoners wore cotton saris.

The style of draping a sari varied depending on how rich the woman was and to which part of India did she belong. Women wore their sari like skirts with a top part draped over their shoulder or worn over their heads as a veil. Working women often draped their sari up between their legs to make a sort of pants. Women in defense tucked in the top part of the sari in the back, to free up their arms for fighting. Most saris were five or six meters long. Younger women generally wore brightly colored saris, although widows wore only white saris.

During the same time, sharp steel needles had reached India from China, and as a result, rich men and women began wearing stitched clothing tightly fitted to their bodies, with lots of embroideries. Yet a majority of the people still wore saris. People would also wear embroidered saris over tight shirts.

Variety of Fabrics During Islamic Period

As the Islamic invasions around 1000 AD grew, Iranian fashions entered India. Ancient Indian clothing became medieval Indian clothing. Both women and men wore trousers with long tunics over them down to their knees, called churidar or salwar kameez. Women would usually wear churidar with a long veil or scarf over it.These became popular, especially in northern India. But they could never replace the sari or the dhoti.

Q. Which of the following is not synthetic fibres?

Hemp is one of the fastest growing plants and one of the first plants to be spun into usable fibre.