Light Travels Along a Straight Line

Life without light would have been pretty dull. Light travels at a speed of 186,000 miles per second. You must have observed that in your house that whenever a beam of light enters a dark room through a tiny hole in the window, the lightwave always travels in a straight line.

Now if suppose we displace the center of the CD’s we observe that we are not able to see the flame of the candle. Why does that happen? This is because the light gets blocked. If the light could have the ability to take a curve and travel, we could have seen the lightwave. But since light travels in a straight line, we were unable to see the flame of the candle when the CD is displaced. This proves that light travels along a straight line. 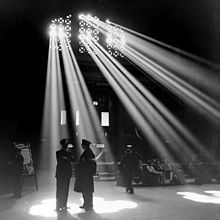 In the above picture, we can clearly see that light coming through the holes in the window travel along a straight line.

Q1. The phenomenon in which the moon’s shadow falls on earth,  or the earth casts its shadow on the moon, is known as

Q3. We can see the objects only when

Answer: A. Objects can only be seen when light falls on the object and are reflected back to our eyes.

Share with friends
Previous
Expressions and Its Parts
Next
Algebraic Expressions