As we all know that Sun is the major source of light. But what is the color of the sunlight? We see the rainbow in the sky consisting of different colors that usually appears after the rains when the sunlight is low.  Also, the sky appears orange or red during sunset. So is sunlight colorful? Let us learn this in detail and see what is the actual color of sunlight. White light is called as white because it consists of seven colors. The sunlight splits into seven colors namely violet, indigo, blue, green, orange, and red. We usually call it as VIBGYOR. When we mix all these colors we just get one light which is the WHITE light. Let us carry out a small activity to show that sunlight has seven different colors. 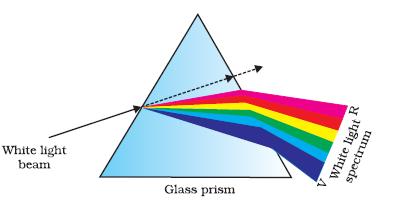 With the help of a narrow beam of light, a glass prism, and a white wall it is possible to produce the band of seven colors using white light. Keep this arrangement near the window. Place the glass prism in such manner that the sunlight through the window falls on one side of the prism and then on the white wall. You can see that the light reflected on the wall has several colors. The prism splits the white light into seven different colors. This splitting of white light into many colors is called as a dispersion of light.

This shows that the sunlight consists of several colors. Sometimes in the rainbow, you may not see all the seven colors. This is because of the colors overlap each other. The degree of bending of the light’s path depends on the angle that the incident beam of light makes with the surface, and on the ratio between the refractive indices of the two media (Snell’s law) and results in splitting all the seven colors present in white light.

It is always not necessary that the source of light should always be white to get a spectrum. The composite light which contains a range of three to four colors also produces a band of three to four colors. A glowing 40W tungsten filament bulb does not produce pure white light. It is a source of composite light and will also produce a spectrum but the spectrum may not be the same as the spectrum of white light. The type of spectrum depends upon the nature of the source of light.

Dispersion of Light In Daily Life

Examples of dispersion in our daily life:

Q. Blue color of sea water is due to:
Ans: A. The ocean looks blue because red, orange and yellow are absorbed more strongly by the water than the blue.
Share with friends
Previous
Animal Kingdom
Next
Mirrors