We ‘see’ a lot of things around us on a daily basis. But how are we able to do so? You might answer saying it is because of our eyes. Isn’t it? And you aren’t wrong. But is it just the eyes? What about the light bounced back from the things around us and enabling us to see things better? What is this phenomenon? It’s because of ‘Reflection of Light’. Let us study more about it below.

What is Reflection of Light?

When a ray of light falls on any object (polished, smooth, shiny object), light from that object bounces back those rays of light to our eyes and this is known as “Reflection” or “Reflection of Light”.
This phenomenon is what enables us to look at the world around us based. Before, after and during reflection light travels in a straight line. For example, twinkling of stars or light reflected by a mirror. 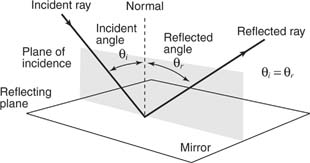 a. The angle of incidence is equal to the angle of reflection.
b. The incident ray, the normal and the reflected ray, all lie in the same plane.

There are two types of reflection : 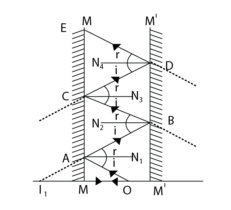 As shown in the figure, infinite images are formed when an object placed is placed between two parallel plane mirrors. Consider an object placed in between the mirrors and we can actually see the image, in this case, the number of images would range from 1 to X (X being a very large number depending on your position relative to the mirror and object, and X not infinity).

So, in case of parallel mirrors, we get infinite images.

Q. Which of the following phenomenon has two angles that are equal to each other?