Ever wondered how people obtain water where it doesn’t rain? Or where there are no sources of fresh water such as a lake, a river, a pond, etc? They usually obtain water from the ground. Let’s find out more about Groundwater as an Important Source of Water.

Groundwater is often cheaper, more convenient and less vulnerable to pollution than surface water. Therefore, it is commonly used for public water supplies.

An aquifer is an underground layer of water-bearing permeable rock, rock fractures or unconsolidated materials (gravel, sand, or silt) from which groundwater can be extracted using a water well. It is a porous substrate.  When water can flow directly between the surface and the saturated zone of an aquifer, the aquifer is unconfined. The deeper parts of unconfined aquifers are usually more saturated since gravity causes water to flow downward.

Infiltration is a process where the water on the surface seeps into the soil and enters it. The Infiltration rate is a measure of the rate at which soil is able to absorb rainfall or irrigation. 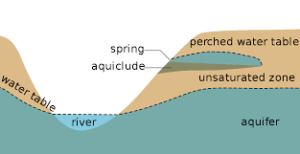 The water table is the upper surface of the zone of saturation. The zone of saturation is where the pores and fractures of the ground are saturated with water. Water that collects or flows beneath the Earth’s surface, filling the porous spaces in soil, sediment, and rocks. Groundwater is formed due to rain and melting of snow, it is also a source of water for aquifers, springs, and wells.

Sol: The correct answer is option ”a”. The water table is also known as groundwater table in which water seeps into the ground and move downward till it reaches the stage of saturation. The velocity at which water flows underground depends on the permeability of the rocks.

Q2. Groundwater gets recharged by the process of :