Issue of Shares is the process in which companies allot new shares to shareholders. Shareholders can be either individuals or corporates. The company follows the rules prescribed by Companies Act 2013 while issuing the shares. Issue of Prospectus, Receiving Applications, Allotment of Shares are three basic steps of the procedure of issuing the shares. The process of creating new shares is known as Allocation or allotment. Let us see the two types of shares of a company and the procedure for issue of shares that a company must follow.

Nature and Classes of Shares

Thus a share is the basis of ownership of the company. And the person who holds such shares and is thus a member of the company is known as a shareholder.

Now the Articles of Association will contain some essential information about shares and share capital, like the classes of shares to be prescribed. In all, there are two types of shares a company can allot according to the Companies Act 2013. They have different natures, rights, and obligations. Let us take a look. A preference share is one which carries two exclusive preferential rights over the other type of shares, i.e. equity shares. These two special conditions of preference shares are

Preference shares can actually be of various types as well. They can be redeemable or irredeemable. They can be participating (participate in further profits after a dividend is paid out) or non-participating. And they may be cumulative (arrears in demand will cumulate) or non-cumulative.

Equity share is a share that is simply not a preference share. So shares that do not enjoy any preferential rights are thus equity shares. They only enjoy equity, i.e. ownership in the company.

The dividend given to equity shareholders is not fixed. It is decided by the Board of Directors according to the financial performance of the company. And if in a given year no dividend can be declared, the shareholders lose the dividend for that year, it does not cumulate.

Equity shareholders also have proportional voting rights according to the paid-up capital of the company. Essentially it is one share one vote system. A company cannot issue non-voting equity shares, they are illegal. All equity shares must come with full voting rights. 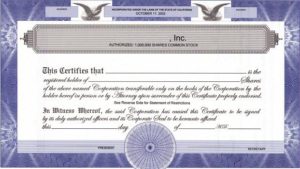 When a company wishes to issue shares to the public, there is a procedure and rules that it must follow as prescribed by the Companies Act 2013. The money to be paid by subscribers can even be collected by the company in installments if it wishes. Let us take a look at the steps and the procedure of issue of new shares.

Procedure of Issue of New Shares

It also states the manner in which the capital collected will be spent. When inviting deposits from the public at large it is compulsory for a company to issue a prospectus or a document in lieu of a prospectus.

Once the minimum subscription has been reached, the shares can be allotted. Generally, there is always oversubscription of shares, so the allotment is done on pro-rata bases. Letters of Allotment are sent to those who have been allotted their shares. This results in a valid contract between the company and the applicant, who will now be a part owner of the company.

If any applications were rejected, letters of regret are sent to the applicants. After the allotment, the company can collect the share capital as it wishes, in one go or in instalments.

Q: What is a minimum subscription?

Ans: This is a minimum amount that must be raised when the shares are offered to the public during the issue of shares. This minimum subscription is generally set by the Board of directors, but it cannot be less than 90% of the issued capital.

So at least 90% of the issued capital must receive subscriptions or the offer will be said to have failed. In such a case the application money received thus far must be returned within the prescribed time limit.