Now that you know what a contract is, can you identify the various Types of Contracts? Proper knowledge of the types of contracts is essential as it will allow you to decide the legal ramifications of an agreement. Here we will see the different Types of Contracts classified as per their validity.

Types of Contracts On The Basis Of Validity

Chapter 2 of the Indian Contract Act, 1872 discusses the voidable contracts and void agreements. On the basis of validity or enforceability, we have five different types of contracts as given below.

The Valid Contract as discussed in the topic on “Essentials of a Contract” is an agreement that is legally binding and enforceable. It must qualify all the essentials of a contract. 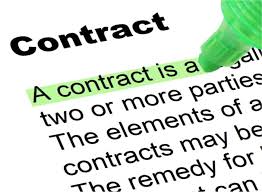 We have already stated examples of these kinds of contracts in the “Essentials of a Contract”.

Example: A agrees to pay B a sum of Rs 10,000 after 5 years against a loan of Rs. 8,000. A dies of natural causes in 4 years. The contract is no longer valid and becomes void due to the non-enforceability of the agreed terms.

These types of Contracts are defined in section 2(i) of the Act: “An agreement which is enforceable by law at the option of one or more of the parties thereto, but not at the option of the other or others, is a voidable contract.” This may seem difficult to wrap your head around but consider the following example:

Suppose a person A agrees to pay a sum of Rs. 10,0000 to a person B for an antique chair. This contract would be valid, the only problem is that person B is a minor and can’t legally enter a contract.

An agreement that leads to one or all the parties breaking a law or not conforming to the norms of the society is deemed to be illegal by the court. A contract opposed to public policy is also illegal.

Several examples may be cited to illustrate an illegal contract. For example, A agrees to sell narcotics to B. Although this contract has all the essential elements of a valid contract, it is still illegal.

Also because of the criminal aspects of the illegal contracts, they are punishable under law. All the parties that are found to have agreed on an illegal promise are prosecuted in a court of law.

Unenforceable contracts are rendered unenforceable by law due to some technical. The contract can’t be enforced against any of the two parties.

For example, A agrees to sell to B 100kgs of rice for 10,000/-. But there was a huge flood in the states and all the rice crops were destroyed. Now, this contract is unenforceable and can not be enforced against either party.

Solved Examples on Types of Contracts

Q1: List the main differences between a void and a voidable contract?

Answer: The following table will illustrate the major differences between a void and a voidable contract.