Humans in the animal kingdom, show the highest levels of specialization. In fact, birds and mammals show a specialized feature called as the double circulation. If you have guessed that this has something to do with the circulatory system, you are bang on target.

A circulatory path is a path taken by the blood, wherein it travels throughout the different organs of the body through arteries and veins. In humans, it is a closed circulatory system that exists, as blood flows in closed blood vessels. The circulatory system is responsible for the transport of gases, nutrients, waste products etc. Double circulation is the most efficient way of circulation. Here, in humans, the four-chambered heart, arteries, veins, and capillaries all have a vital role to play. Blood gets pumped out of the heart. This blood goes to different organs and then blood again comes back to the heart. All this happens in a very systematic way through the different arteries and veins carrying oxygenated and deoxygenated blood.

In double circulation, there are two pathways in which blood flows. They are:

The pulmonary circulation or pathway carries the deoxygenated blood from the right side of the heart to the lungs.  Exchange of oxygen and carbon dioxide takes place in the lungs and the blood is now oxygenated (with oxygen). 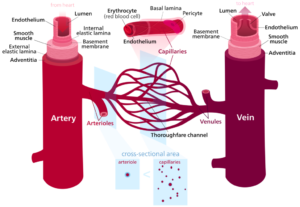 The capillaries at the arterial end allow materials such as water, glucose, oxygen, and amino acids to diffuse out. Capillaries also transport wastes and carbon dioxide to organs which can dispose of them. And so, the waste products enter near the venous ends of the capillaries. To maintain the blood volume, water diffuses in and out of capillaries.

These venous ends of the capillaries are connected with the smaller veins and venules, which join the larger veins. These veins now have deoxygenated blood. Through the main vein called as vena cava, blood enters the right atrium chamber of the heart, from where pulmonary circulation starts.

Q: What is the significance of double circulation in humans?