If there is one thing that can be called as the lifeline, it most certainly will be blood. Without it, the food that you eat cannot be transported to different cells. Oxygen cannot reach the cells nor can waste be eliminated. Even growth cannot happen, as hormones in our body flow through the system, through blood.  Read along to find more fun and scientific facts.

What exactly is blood?

Blood is a special fluid that is actually a connective tissue. We can call it a transport liquid which is pumped by the heart to different parts of the body, after which it comes back again to the heart. This is a process that happens continuously in your body, till your heart beats. The cells of the body are highly susceptible and they need a constant supply of blood. If its flow stops, death can occur within minutes.

It consists of the following components:

The complex working of blood 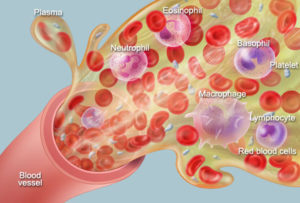 In humans, the role of blood is very significant and it has a very complex working structure.  Its circulation helps in maintaining its constancy in the composition. Circulation is a process through which blood travels all around the body, to different organs through specialized blood vessels.

At any given time, depending on the organ from which blood is moving in or moving out, it’s configuration changes. Of course, the basic components remain same. But the content of the plasma changes. When blood travels to the lungs, it takes in oxygen and gives out carbon dioxide that is got from the tissues. In the intestines, food gets into the bloodstream, after absorption, which then is transported to other cells in different parts of the body. Even the waste products are transported to the eliminating organs through blood. The plasma also carries the chemical messengers, the hormones to the target organs.

There is a fair bit of recycling also that happens. Take, for example, the iron that is released due to the destruction of old RBC’s is taken back to the sites of new RBC production and used once again. At any given time, there should be an appropriate level of concentration of the different components. There is a very effective regulatory mechanism that ensures that this happens.

It is a clear, slightly sticky, yellowish coloured liquid that contains the dissolved proteins, mineral ions, glucose, hormones, carbon dioxide, including the blood cells. Around 90% of the plasma is made up of water and around 6 % of it constitutes the proteins. Albumin is the main protein in the plasma, which regulates the osmotic blood pressure. 55% of the blood fluid is made up of plasma.

These constitute the other half, around 45%. There are three types of cells, namely:

Erythrocytes – They form around 40%-45% of its volume. They are generated from the bone marrow at an astonishing rate of four to five billion cells per hour.  The lifespan of these cells is 120 days. The RBCs are destroyed in the organ called spleen, which is also called as the graveyard of RBC. These cells are red in colour, due to the presence of haemoglobin, which is an iron-containing complex protein.

Leucocytes – They account for 1 % of the total volume, but have a very important role to play. They help in fighting diseases and attack the foreign bodies in the blood. These cells are colourless as they do not have haemoglobin. They are also constantly generated from the bone marrow.

Thrombocytes – These are cell fragments that are produced from the specialized cells of the bone marrow. Their role is very significant. They are responsible for controlling bleeding or in clotting of blood.

Solved Question For you

Q: What are the major components of blood?

Ans: Blood is made up of two main components – Plasma and Blood cells. Plasma is a straw-coloured viscous fluid which is 90% water and has many proteins in it. It also has mineral ions, glucose, hormones, carbon dioxide. It makes up for 55 % of the blood.  The other 55% of it is made up blood cells. These cells are of three types: Erythrocytes (RBC), Leucocytes (WBC) and Thrombocytes.

Ans: Leucocytes are also called WBC’s. They are devoid of any colour and do not have haemoglobin. They are nucleated cells. Even though they account for only 1% of the volume, they have a very important role to play in being healthy and fighting diseases. There are two main types of WBCs – Agranulocytes and granulocytes. Neutrophils, eosinophils, and basophils are the different types of granulocytes. Lymphocytes and monocytes are agranulocytes.