By now, you have learned that there is a lot of interaction between all the components of an ecosystem. However, did you know that we can represent this relationship between the energy and biomass of organisms through a simple diagram? An Ecological pyramid shows precisely this relationship in a diagrammatic format. The predictable changes that are seen in organisms are shown by ecological succession.

Ecological pyramid definition – It is a graphic representation of the relationship between organisms at various trophic levels in a food chain.

The basis of an ecological pyramid is biomass, energy, and number. Just as the name suggests, ecological pyramids are in the shape of a pyramid. The concept was first introduced by Charles Elton, the pioneer British Ecologist. 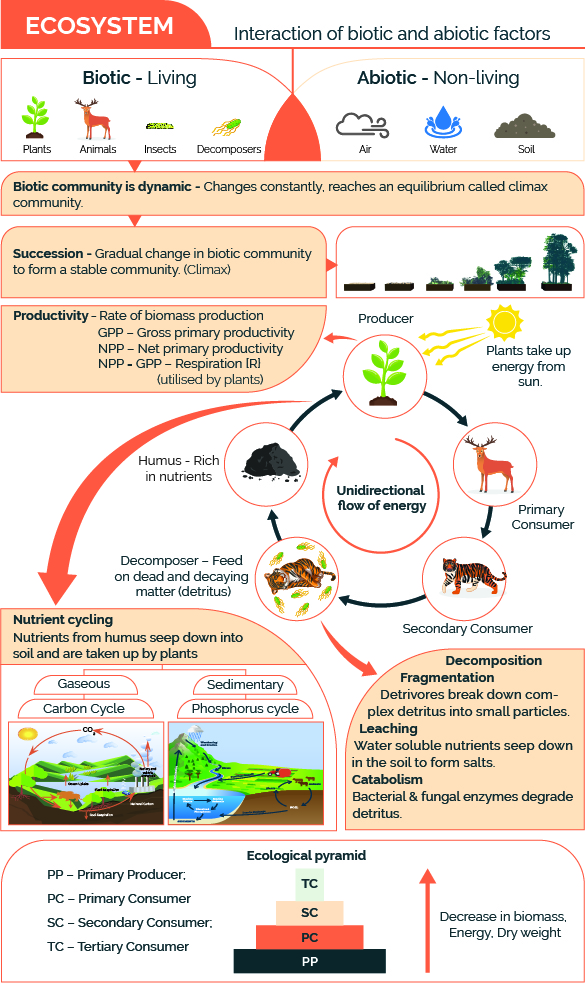 Depending on the factors that we use to represent an ecological pyramid, there are three types. They are:

In general, all ecological pyramids are upright, except in certain cases. For example, in a detritus food chain, the pyramid of numbers is not upright. This is because many organisms feed on one dead plant or animal. The pyramid of biomass in an ocean is also inverted. This is because the biomass of producers in an ocean is less. But a point of note is that the energy pyramid is always upright as the flow of energy is unidirectional.

Now, any form of disturbance or formation of new habitats in the ecosystem can trigger the ecological succession.

The starting point of ecological succession can be traced back to millions and millions of years back when living organisms never existed. Slowly, new organisms started developing. The diversity of the planet started showing changes. These changes were occurring along with the change in the environment.

Q: Are there any species that live on rock and be the starting point of ecological succession?

Ans: Lichens are organisms that can live on a rock. They can form the pioneer species on a bare rock. This is due to the fact that they have the ability to dissolve rock and help in weathering and soil formation.