Economic production is the result of the output we produce by employing factors like land, labour, capital, and entrepreneurship. It is possible to determine the optimum amount of production possible considering different combinations of these inputs. Such a determination is called the producer’s equilibrium.

The value of all assets used for production is limited. Hence, the producer has to use such a combination of inputs as would provide him with maximum output and profits. This optimum level of production, also called producer’s equilibrium, is achieved when maximum output is derived from minimum costs.

In order to find out producer’s equilibrium, we first need to understand isoquant curves and iso-cost lines. These two concepts help us calculate optimum production.

These lines represent various input combinations which produce the same levels of output. The producer can choose any of these combinations available to him because their outputs are always the same. Thus, we can also call them equal–product curves or production indifference curves.

Just like indifference curves, isoquants are also negatively-sloping and convex in shape. They never intersect with each other. When there are more curves than one, the curve on the right represents greater output and curves on the left show less output.

Consider the table below. It shows four combinations, i.e. A, B, C and D, which produce varying levels of output.

Plotting these figures on a graph provides us with this curve (Figure 1): 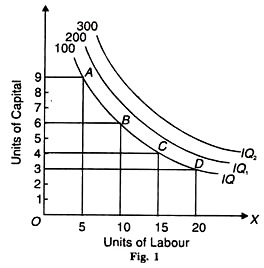 The X-axis shows units of labour, while the Y-axis represents units of capital. Points A, B, C and D are combinations of factors on which IQ is the level of output, i.e. 100 units. IQ1 and IQ2 represent greater potential output.

Isocost lines represent combinations of two factors that can be bought with different outlays. In other words, it shows how we can spend money on two different factors to produce maximum output. These lines are also called budget lines or budget constraint lines.

Let’s assume that a farmer has Rs. 1,000 to spend on labour costs and ploughs for farming. The cost of one such plough and wage per labourer is Rs. 100. Considering his total outlay of Rs. 1,000, he can spend that money in the following combinations:

The farmer, in this case, can either spend the entire sum of Rs. 1,000 on just ploughs by buying 10 of them. Similarly, he can also spend it all on labour by employing 10 labourers. He can even purchase both, labour and ploughs using different combinations as shown above. The total outlay of Rs. 1,000 will remain the same. Hence, the isocost line will remain straight as shown below: 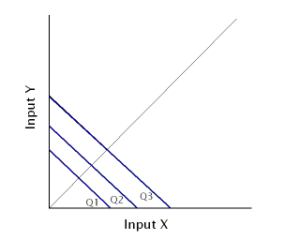 The x-axis represents units of ploughs, and Y-axis would show units of labour. Output levels are shown by a straight line because they remain constant.

Isoquant curves, as we learned above, show us input combinations that we can employ to produce certain levels of output. Furthermore, isocost lines help us determine combinations of two factors in which we can invest our outlays to produce output. A combination of these two graphs is what gives us the optimum production level, i.e. the producer’s equilibrium.

Using this equilibrium, the producer can determine different combinations to increase output. He can also use this information to find ways to cut costs using the same inputs and consequently generate more profit. We can find out the least expensive combinations of factors by superimposing isoquant curves on isoquant lines.

The graph below shows how we can use isoquant curve and isocost lines to determine optimum producer’s equilibrium. 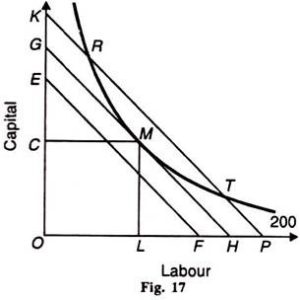 In the figure shown above, the isoquant curve represents targeted output, i.e. 200 units. Icocost lines EF, GH and KP show three different combinations in which we can utilize the total outlay of inputs, i.e. capital and labour.

The isoquant curve crosses all three isocost lines on points R, M and T. These points show how much costs we will incur in producing 200 units. All three combinations produce the same output of 200 units, but the least costly for the producer will be point M, where isocost line GH is tangent to the isoquant curve.

Thus, point M is the producer’s equilibrium. It will produce the same output of 200 units, but will a more profitable combination as it will cost less. The producer must, therefore, spend OC amount on capital and OL amount on labour.

Answer: Isoquant curve shows combinations of inputs employable to produce a certain output. Isocost lines portray cost combinations of two inputs like capital and labour which produce the same amount of output. A combination of both these graphs helps us determine how inputs must be employed to produce maximum output with the least expensive costs underlying them.