How is it that parents and the offspring look similar? The progeny shares some traits or characteristics that are inherited from the parents, and this passes on again to the next generation. In a broader perspective, everything is related to genes, genetics, and heredity. In humans, this concept can be understood clearly through sex-linked inheritance.

What is Sex-Linked Inheritance?

How does one determine whether an unborn baby is a male or a female? Did you know that the genes and the chromosomes play an important role in this determination? The sex of the individual is largely genetically determined.

Genes that are carried by the sex chromosomes are said to be sex-linked. They carry the genes that determine whether an individual is a male or female, along with other traits. When you see the chromosomes, notice that it is the Y chromosome that determines the sex-linked inheritance of the baby. A mother i.e. a female has both XX chromosomes, whereas the father (male) has XY chromosomes. The Y chromosome of the male has a gene called SRY (“sex-determining region of Y”).

It is this gene that determines that a developing embryo will be a male. An embryo having XX chromosomes does not have SRY gene and hence develop into a female, while the embryo with XY chromosomes has the SRY gene and develops into a male. Human Blood Groups and Their Inheritance

The following figure explains how blood groups are inherited from parents. 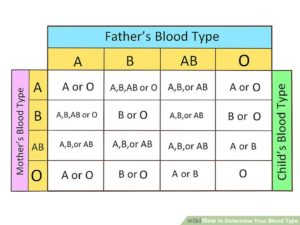 Q.1: Explain why the father determines the sex-linked inheritance of the child?