Sex determination, in biology, is a system which decides the sexual characteristics of an organism or offspring. It helps to determine whether the organism will be male or a female, which are the two most common sexes. The widely used technique is chromosomal sex determination, in which sex chromosome of male i.e. X or Y chromosome, decides the sex or gender of the offspring. Female carries XX chromosome and male carries XY chromosome, in most cases. It is also possible to perform genetic tests to eliminate any chromosomal or genetic disorders. Sex determination is the genetic process of determining the sex of the organism. Let us study in more detail about this. 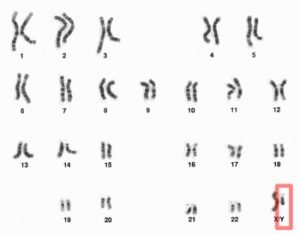 Before we understand how sex determination is done, we need to understand the genetic makeup of a human being. As we all know, humans have 23 pairs or 46 chromosomes. Of these 23 pairs, 22 pairs are known as autosomes whereas 1 pair is known as the sex chromosome. It is this one pair that helps in determining the sex of an individual.

This was first studied by the German scientist Hermann Henkingin 1891. He first noticed a different nuclear material in some of the male gametes in the insect he was studying. It was named the X chromosome. He also noticed that a large number of insects had only one chromosome and were denoted as XO. From here began the studies on sex determination of both sexes in all animals.

Browse more Topics under Principles Of Inheritance And Variation

Females in humans have 2X chromosomes- 1 each is inherited from either parent and denoted as XX. Males in humans have 1X and 1 Y chromosome, where the X is inherited from the mother and the Y from the father. In a way, we can say that it is the father who determines the sex of the unborn child. This can put to shame a lot of history in which people believed it is the woman who was responsible for not giving birth to a male heir. We can also say that the absence of the Y chromosome makes the individual a female.

At the time of spermatogenesis in males, both types of gametes are produced- one carrying the X chromosome and one carrying the Y. At the time of fertilization, the sex of the resulting zygote will depend on which gamete of the father will fuse with the X of the mother. We can, therefore, say that there is a 50% chance that the child will be a male and 50% that it can be a female.

It is important to note that pre-natal sex determination is an offense in many countries in the world, including India. A process known as Amniocentesis is done that examines the amniotic fluid which determines an abnormality in the fetus. This process also reveals the sex of the unborn child. Due to abortions of the female fetus in countries like India, the government has imposed a strict ban on this process of sex determination. In many western countries, sex determination is legal.

Q1: What is the genetic makeup of female birds?