Peyer’s patches refer to small masses of lymphatic tissue which are available in the small intestine. It is certainly an important part of the immune system. Students can learn more about Peyer’s patches and its functions here.

Definition and Meaning of Peyer’s Patches

Peyer’s patch refers to any of the nodules of lymphatic cells which aggregate to result in the formation of patches or bundles. Furthermore, they exist in the lower section of the small intestine which is known as the ileum. Also, they are called as aggregated lymphoid nodules.

The aggregated lymphoid nodules form a vital part of the immune system. This is because they monitor intestinal bacteria and also prevent the pathological bacteria growth in the intestines.

The shape of the aggregated lymphoid nodules has an egg-shaped appearance. Furthermore, they are similar in the structure to the lymph nodules. Moreover, no connective tissue capsule surrounds them 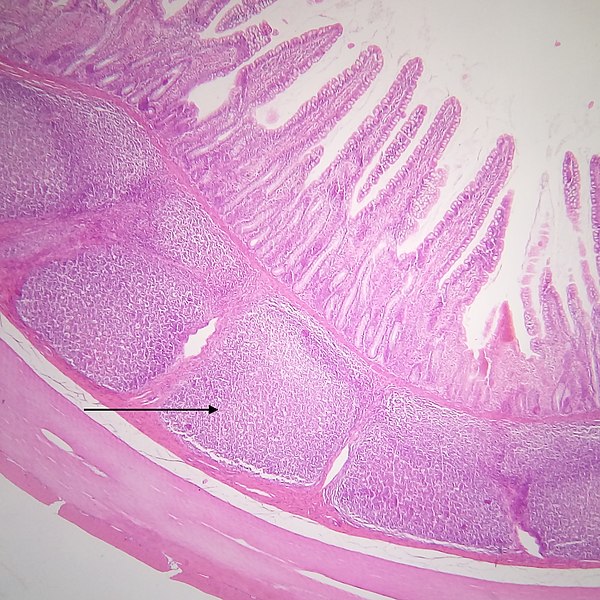 The immune system exists all over the body. Furthermore, it is active everywhere in the body. Above all, it is able to take different forms in various organs of the body.

There are three main roles of the immunity system. These are- removing dead cells, destroying abnormal cell growth, and protecting the body from pathogens.

The gastrointestinal tract faces attack from a high number of pathogens which enter the body through foods and liquids. So, it is vital for the immune system to identify and destroy micro-organisms and various other toxins.

One problem is that the immune system could be that it may be treating every food particle as a possible threat. Therefore, the body would always suffer from sickness and inflammation due to immune response. This would make it impossible to eat food and receive energy. Most noteworthy, Peyer’s patch provides a solution to this problem.

The composition of Peyer’s patches is quite similar to the tissue in the spleen as well as in other parts of the body which are involved in the lymphatic system. Moreover, the lymphoid tissue consists of a large number of white blood cells. Also, the involvement of this kind of tissue is very high.

Mucus secreting membranes are an important part of the primary defense against pathogens. Furthermore, the mucosal lining of the nostril traps microbes before they enter the blood.

The lymphoid tissue is prevalent in mucosal areas. Similarly, the lining of the gastrointestinal tract is a mucous membrane and it has early contact with the foreign bodies.

The Structure and Number of Peyer’s Patches

An adult has 30 to 40 Peyer’s patches on average in the region of the small intestine. Furthermore, their number in the intestines drops significantly after the age of late 20s in humans.

The lumen refers to the empty space which is available inside the gastrointestinal tube. Moreover, this is the tube through which the matter after ingestion passes. Most noteworthy, lymph nodules are present inside of the patch. These lymph nodules are filled with white blood cells.

Q1 Which of the following statements is not true when it comes to Peyer’s patches?