On the world map continents are present and the number of continents is 7. Most noteworthy, these are Africa, Antarctica, Asia, Australia (Oceania), Europe, South America, and North America. However, depending on where we are living, we know that there are 5, 6 or even 4 continents. 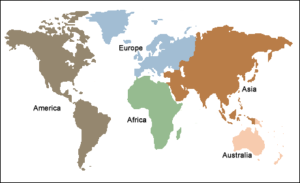 On the world map continents, Africa is the second-largest continent the land area along with the population. Furthermore, the equator runs through Africa and it runs in the mid-point of the continent. Moreover, near about one-third, part of Africa is present in the southern hemisphere.

Africa holds up near about 20% of the total land area in the whole world. The Indian Ocean, the Atlantic Ocean, the Mediterranean Sea and the Red Sea all around Africa.

It is at the South Pole, it does not have any countries or even doesn’t have any permanent population. Furthermore, it is only used for the scientific base.

On the world map continents, Antarctica is the fifth-largest continent by its area of land. On the other hand, it is also a continent with the minimum population.

Asia has the longest coastline from all the continents. Moreover, it has a very diverse climate that is mostly dry. Also, the country that has the most population in Asia is China.

Australia is the smallest continent in the world. It is the second continent that has the least population.

The word Oceania also comes in use for describing this region in order to make it different from the country of Australia. However, Oceania is not a continent, it is a continental grouping instead.

Europe is the third continent with the highest population in the whole world. Furthermore, it is also the sixth-largest continent by its land area. Although, Europe is said to be a separate continent due to cultural and linguistic variations.

Europe is a home for more than 10% of the total population of the world. Also, the climate of Europe is largely shaped by currents of the Atlantic Ocean.

North America has the largest land area in the world at number 3. It is the fourth largest continent in the world according to its population. It is also said sometimes a subcontinent of the Americas, North America is a home for the longest land border in the whole world.

These land borders are common between Canada and the United States. The climate of North America is colder in the north. The US is the country with the most population in North America.

South America is the fourth largest continent in the world by land area. And the third most populous in the world. Furthermore, it is in the southern hemisphere, with the exception of a small area of the northernmost part of the continent.

Moreover, it is present completely in the western hemisphere. South America is a home for the amazing flora and fauna. Brazil is the country with the highest population in South Africa.

Ques. North America and the Caribbean Sea lies to the northwest from