In the human body, there are many parts of leg. All parts of the leg have a different function specifically. The leg of the human body is a complicated type of machinery. It can only do its job through the complicated interaction of the different parts. Every single part of a human leg is made by its own self component parts. The bones grant the rigid structure. The Muscle provides ambulatory power and the tendons and ligaments ties all the things up together.

What is Human Leg?

The human leg, in the common word sense, is the entire lower limb of the human body. This includes the foot, thigh and even the hip or gluteal region. However, the definition of human anatomy mentions only to the section of the lower limb extending from the knee to the ankle, also known as the crus. Standing, and all forms of locomotion including recreational such as dancing, and constitute a significant portion of a person’s mass that comes under leg functions. Female legs usually have greater hip anteversion and tibiofemoral angles. But shorter femur and tibial lengths than those in males. 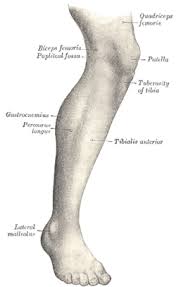 The upper leg is the source of some of the largest muscles inside the body. It is one of the most important parts of leg. These muscles provide power to humans for propelling themselves when they walk or jump in an upright position. The muscles of the leg are typically divided into three main groups. The glutes include the muscles that attach to the hip joint and rotate it.

In the front of the leg, four large muscles are present that are the quadriceps. The back portion of the thigh includes the three muscles that are called the hamstrings. All of these muscles are anchored throughout the largest bone present in the human body known as the femur. Connective tissue present above and below the femur connects it to the pelvis and the lower leg for making the hip and knee joints.

Question: How many Bones are there in Human Body?
Hint: It is not what you think. Click to Know the Answer

The lower leg has a structure by two bones. The larger bone we refer to as the tibia and is present in front of the lower leg. Moreover, the fibula is the smaller bone that goes towards the back part of the leg. The primary cells in this area are termed as the calf. And the calf is actually a group of various individual muscles. The prominent, easily seen muscle on the backside of the leg, we refer to as gastrocnemius.

The knee joint is present where the two most important parts of leg that are femur and tibia come together. The kneecap to which we also call patella covers up the forward-facing aspect of the joint. And the two major ligaments create the stabilizing force inside the knee. The anterior cruciate ligament helps the knee to be stable while it rotates.

And it also anchors the femur so it can’t slide it back against the tibia. The posterior cruciate ligament is another kind of stabilizer. It combines with the anterior ligament for ensuring the femur and the tibia don’t slide against each other in a way they never intended to.

The ankle is the joint of the connection between the lower portion of the foot and also the leg. A series of seven ligaments from a connection around the ankle. Behind the ankle and connecting the foot to the rear side of the leg is known as the Achilles tendon. It is the largest tendon of the parts of leg. And it is also critical to the walking process. Injuries to the Achilles tendon are very serious.

Solved Question on Parts of Leg

Ques. Which one of the following is not a branch of the Posterior tibial artery?

Q: Which is the longest and heaviest bone of the body?