These are the body parts in various species which helps in breathing. So the respiratory system of their body works with the help of Spiracles. These are the breathing openings found on the surface of insects. Certain cartilaginous fish and certain species of sharks etc. don’t have spiracles.

In fish, these comprise a pair of openings just behind their eyes. These allow it to draw oxygenated water in from above without having to bring it in through the gills. In this article, we will learn about Spiracles and their types and examples. 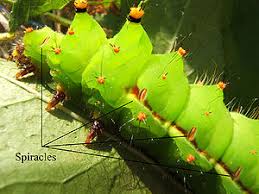 Usually, some animals have openings on the surface of their skin, which usually lead to respiratory systems. Insects sometimes have it on their exoskeletons to allow air to enter the trachea. We can locate them laterally along the thorax and abdomen of most insects – usually one pair of spiracles per body segment.

Small muscles that operate one or two flap-like valves within each spiracle – contracting to close the spiracle, or relaxing to open it, regulate the airflow.

The timing and duration of spiracle closures affect the respiratory rates of the organism. These sometimes may also be surrounded by the hair to minimize bulk air movement around the opening, and thus minimize water loss. In some fish, it exists as a small opening behind both eyes that leads to the mouth.

These open into the mouth of fish, where water is passed over its gills for gas exchange and out of the body. Moreover, it assists fishes in respiration even when they are lying on the ocean bottom or when they’re inside in the sand.

Likely they evolved from gill openings in the fishes. In jawless fish, these were simply the first gill openings behind the mouth. This gill opening separated as the jaw evolved out of the structures between it and the other gill openings.

It remain as a small, hole-like opening in most cartilaginous fish. These are useful for the types of rays that bury themselves in the ocean bottom and can breathe without the aid of exposed gills.

In addition, primitive bony fish with it include the sturgeon, paddlefish, bichirs, and coelacanth. It is believed that they are associated with the hearing organs of frogs and some other amphibians.

Southern stingrays are sand-dwelling sea animals that use it to breathe while they are lying on the ocean bottom. Its behind the ray’s eyes draw in water is passed over the gills and expelled from its gills on its underside.

In addition, skates, cartilaginous fish that have a flat body and wing-like pectoral fins attached to their head.  These stingrays sometimes use it as their primary method of breathing by bringing oxygenated water into the gill chamber. In the gill chamber, it exchanges carbon dioxide.

Angel sharks are large, have a flat-body which bury themselves in the sand and breathe through their spiracles. They generally lie in wait, camouflaged, for fish, crustaceans, and mollusks and then lunge to strike and kill them with their jaws.

They pump the water inside through it and outside through their gills.  Also, these sharks can absorb oxygen and eliminate carbon dioxide without constantly swimming, as more mobile sharks must do.

Insects are having spiracles, which allow air to move into their tracheal system. Since insects don’t have lungs, so they are using it to exchange oxygen and carbon dioxide with the outside air. Moreover, insects open and close their spiracles using muscle contractions.

Oxygen molecules then travel through the insect’s tracheal system. Each tracheal tube ends with a tracheole, where the oxygen dissolves into the fluid of tracheole fluid. The oxygen then diffuses into the cells.

In older texts, they sometimes refer to the blowhole of the whale as a spiracle. Whales use their blowholes to take in the air and dispel carbon dioxide when they surface. As we know that Whales have lungs like other mammals rather than gills like fish. They have to breathe air, not water.

Ans: These sharks also have prominent spiracles or respiratory openings behind their eyes that allow the fish to pull in the water while buried under the sand. Sharks from this group such as great white sharks would indeed die from lack of oxygen if they stopped swimming