As you are reading this, you are simultaneously breathing in oxygen and giving out carbon dioxide. Did you realize this? This is an action that you do continuously. To put it in scientific terms, it is a process called respiration that is happening. Let us explore this life process.

Did you know that there are complex chemical reactions that occur inside the human body during this respiration process? This process involves the production of energy due to the various reactions.

In both the types of respiration, it is the glucose (carbohydrate molecule) that undergoes reactions. The following picture shows how glucose gets converted to energy and releases CO2, lactic acid, ethanol, and water, depending on the presence or absence of oxygen.

So, where does this respiration occur? In the cells of course! And in the cells, the entire chemical process occurs in the mitochondria. Here, the energy that is released is stored in the form of ATP. As and when the need arises, the mitochondria release the stored energy.

The full form of ATP is Adenosine Triphosphate. It is the energy currency in the cellular respiration. So, when cells of the body require energy for performing the metabolic activities, they use this ATP and break it down to get the required energy. 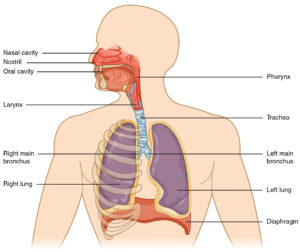 The human respiratory system consists mainly of a pair of lungs, trachea, bronchi, and alveoli. Air enters the body through the nostrils. They pass through an air passage called the nasal passage. From here, it enters the pharynx and larynx. The larynx is called the voice box. From the larynx, the air then goes to the trachea, from where they enter the lungs. The trachea has rings of cartilage that prevent the collapse of the trachea when the air is not present.

As the trachea enters the lungs, it divides and forms branches called as bronchi, which enter the two lungs. In the lung, every single bronchus further divides into bronchioles.  At the end of the bronchioles, there are air sacs present called as the alveoli. Each alveolus comprises of a thin membrane. This is the place where exchanges of gases take place. There is an extensive network of blood capillaries and blood vessels here.

The whole process of the breathing cycle occurs in a systematic fashion. The lungs also have some residual volume of air. This ensures that there is sufficient time for oxygen to be absorbed and for the carbon dioxide to be released. 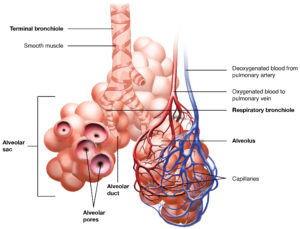 Q: Pyruvate, the three carbon molecule breaks down into carbon dioxide, energy, and water at which site?

Ans: Mitochondria are the site of cellular respiration, where the breakdown occurs.