Sex Determination: As we grow up, we notice various changes in our body. Why do they happen? Well, most of it is attributed to adolescence. Not only you, but each one of us face these changes. It is absolutely normal! As we all know, adolescence is a transition period in life between childhood and adulthood.  Let’s go through a reproductive system, menstrual cycle and sex determination in details.

As a part of growth mechanism, the body undergoes a lot of changes physically as well as psychologically. Puberty commences the sexual maturity in adolescents. Hormones play a major role during this period. However, the reproductive phase in boys and girls are different.

Adolescence marks the onset of reproductive phase in boys and girls. The development of secondary sexual characteristics is the beginning of this. Once the gonads begin to produce gametes (sperm in male and ovum in female), they are capable of reproducing. However, the production of gametes in males and females takes place in different ways.

One of the ovaries releases the matured ovum in every 28 to 30 days. This is called ovulation. The uterus becomes thicker and prepares itself for implantation. If the egg fuses with the sperm it becomes fertilized. The fertilized egg (egg fused with sperm) leads to pregnancy.

Contrary to this, unfertilized egg leads to shedding of uterus walls and causes bleeding in women. Menstruation is the bleeding phase. Menarche is the first menstrual flow. By the age of 50 years, menstrual cycle stops forever and is marked as menopause. The time interval from one menstrual cycle to another can vary from 28 to 30 days. 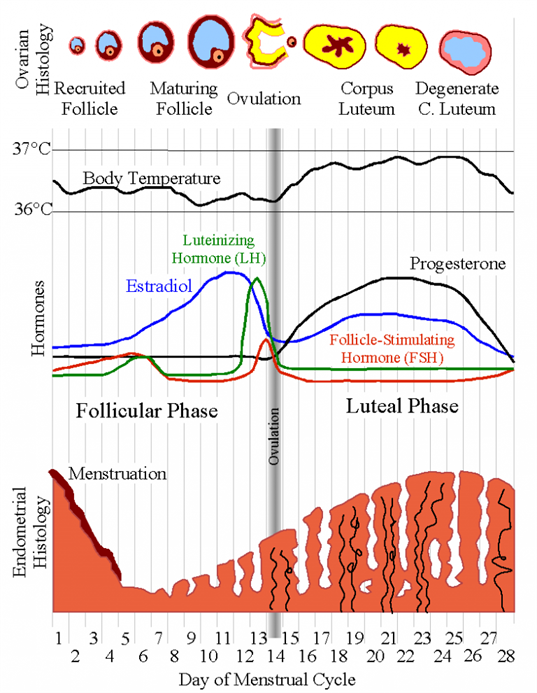 The sex hormones along with few other hormones are responsible for this phase in women. The variation in these hormones may change the ovulation day. The irregularity in menstrual cycle is also attributed to hormonal imbalances. However, what is interesting to know is how the sex of a child is determined!

The gametes are special cells called reproductive cells.The gametes contain only 23 single chromosomes and hence, they have only one of the two sex chromosomes that exist in the normal body cells. In females, all the gametes or all the egg cells contain X chromosomes.

Question: Write a note on the sex determination of a baby.

Answer: The sex of a baby to be born is decided at the moment the egg cell of woman gets fertilized by the sperm of man and pregnancy occurs. The instructions for determining the sex of baby are present in the sex chromosomes which are in the nucleus of the fertilized egg called zygote.

Father is responsible for the sex of the baby which is born.