If you were amazed by the beautiful roads that transport cars and bikes, then take a moment to see within yourself. There is this amazing network of blood vessels inside your body that covers a distance of an astonishing 100,000 km. These are responsible for the transportation of human beings. Let us take a closer look.

Circulatory System and its Components

Your blood travels through these blood vessels transporting oxygen, carbon dioxide, digested food, hormones and even waste products. It is amazing to see how transportation in human beings is carried out by the circulatory system, with the heart and the vast network of blood vessels. 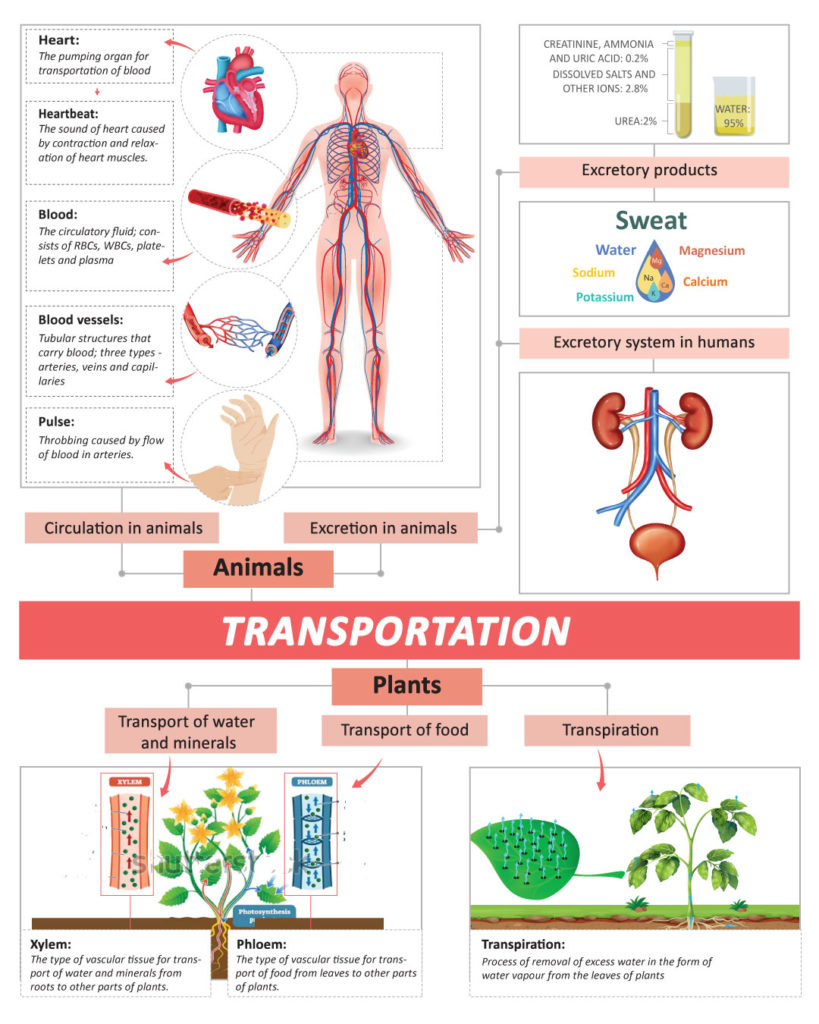 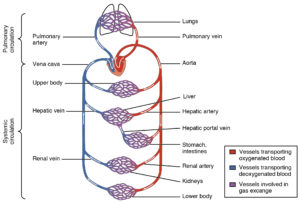 In human beings, there is a phenomenon called double circulation that occurs, which is an efficient way. The heart pumps the blood, and through the various blood vessels, it travels to different organs and then comes back again to the heart. Now, this flow of blood in humans occurs in two pathways called the pulmonary pathway and the systemic pathway.

The double circulation seen here ensures that there is no mixing of oxygenated blood and deoxygenated blood. There is also an efficient supply of oxygen to the body cells and a greater rate of blood flow in the body. 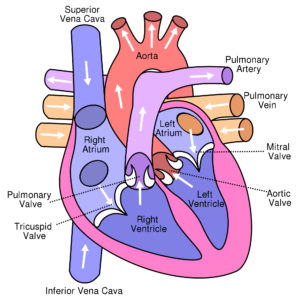 Read about the Excretion System in Humans, Plants and Animals.

Arteries and veins are the main blood vessels. These are interconnected by a network of smaller vessels called capillaries.  Veins carry deoxygenated blood to the right side of the heart whereas arteries carry oxygenated blood away from the heart to different parts of the body.

In human beings and vertebrates, the lymphatic system acts as a subsystem of the circulatory system. It also has a role to play in the transportation in human beings. Lymph is a special fluid called the tissue fluid. It plays a role in the exchange process of nutrients and gases that occurs through blood. Any excess fluid remaining in the cells and tissues is collected by the lymph and is drained into the veins, which carry blood.

Q: Write a short note on blood pressure in humans.

Ans: Blood pressure is an important vital sign of health. It is the force that blood applies on the walls of the blood vessels. It is expressed in terms of systolic pressure and diastolic pressure. The unit of measurement is mmHg. The normal blood pressure range is 120/80 mmHg.

Answer: The components of the transport system in human beings are the heart, blood, and blood vessels. The function of the heart is to pump oxygenated blood throughout the body and receives deoxygenated blood from the various body parts and sends this impure blood to the lungs for oxygenation. Blood has three main functions: transport, protection, and regulation. Blood transports the following substances: Gases, namely oxygen between the lungs and rest of the body. Nutrients from the digestive tract and storage sites to the rest of the body. The function of blood vessels is to transport blood throughout the body.

Q2. How is oxygen and carbon dioxide transported in human beings?

Q.3 Name the body structure concerned with the given functional activity: Combines with the oxygen in the lungs

Answer: The Haemoglobin in the blood combines with the oxygen in the lungs to form oxyhaemoglobin. The oxyhaemoglobin is then transferred to the different parts of the body. So, the correct answer is ‘haemoglobin’.

Q4. pH of human blood is

Answer: pH is the measure of acidity or basicity of a substance, which ranges from 0 -14. Blood has a pH in the range of 7.35 to 7.45 making it slightly basic. Blood having a pH below than 7.35 is considered acidosis and above 7.45 is considered to be alkalosis.