Fertilization is the fusion of the male gamete and female gamete to form a zygote in plants. In flowering plants, the fertilization is consequently termed as double fertilization as the two male nuclei in the pollen grain fuse with the egg and the polar nuclei to form the diploid zygote and the triploid endosperm.

As mentioned earlier, the endosperm is formed by the fusion of the haploid male nucleus with the polar nuclei(diploid) to form the triploid endosperm. The endosperm functions to provide nutrition in the form of starch and in some cases even proteins to the developing embryo.

The fusion of one of the male nuclei along with the female gamete in the ovule leads to the formation of the zygote. The zygote undergoes cell divisions to give rise to the embryo. The embryo now develops two distinct ends known as the micropylar end towards the base and the chalazal end being the other end. The dividing embryo forms the seed and the embryo sac.

Once the fertilization occurs, there are many changes that occur in the structure of the flower.

Formation of Fruit and Seed 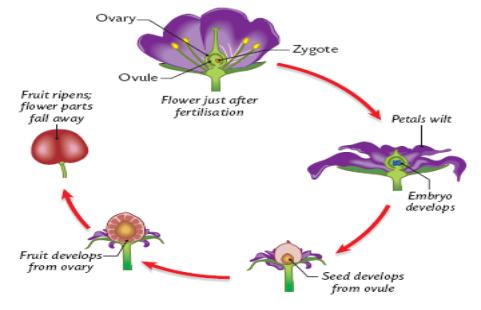 Once fertilization has occurred and the seed development begins, the ovary undergoes cell division to begin its transformation into a fruit. The wall of the ovary becomes the wall of the fruit known as the pericarp. The pericarp can be further divided into three layers: Epicarp, Mesocarp, and Endocarp. The pericarp acts as a protective covering for the developing seeds until dispersion occurs.

The seed develops from the ovules inside the fruit. As mentioned earlier, the integuments of the ovule from the double-layered seed coat. The seed is made up of one or two cotyledons depending upon the class of plants. As the seed develops, many structural changes occur. The seed takes nourishment from the endosperm for its growth and as the seed nears germination, the water from the seed is lost and the micropyle opens up to allow the stalk to grow from it.

Question: Which is true about the seed?

Solution: Option D. Options A and C are correct in relation to the seed. Option b is incorrect as the seed doesn’t develop from the pollen grain.