Flowers are attractive, colourful and often fragrant structures of flowering plants. They are the primary reproductive organs of the plants. Let’s understand more about the flower structure and morphology.

Parts of a Flower

The flower structure is broadly divided into the following parts which are often arranged in a whorled pattern.

This is the base of the flower and lies above the pedicel. It is actually a modified shoot that forms the floral axis and holds the layers of the flower.

This layer actually forms the first layer in the flower structure. They are said to be modified leaves. ‘Calyx’ is the word given for a collection of sepals. The sepals or calyx are often green in colour. Their main function is to protect the flower while it is still in the bud stage.

This forms the second whorl of the flower structure. ‘Corolla’ is the term given for a collection of petals. The petals are the colourful parts of the flower to which the pollinators are attracted to. In many flowers, the Corolla is scented to further make the flower attractive. Like the sepals, the petals are also said to be modified leaves.

The androecium is a term given to the male reproductive system in a flowering plant. It forms the third whorl in a flower. It is made up of one or more stamens. Each stamen  is made up of the following parts:

It is a long slender tube-like structure that holds the anther at the top of it.

It is the pollen producing part of the plant. It is made up of four chambers or segments known as pollen sacs. The anthers give rise to microspores during their development and each of these microspores forms a pollen grain that carries the male gamete. The nucleus in the pollen grain divided mitotically to form two male nuclei.

It forms the fourth whorl of the flower and is often found towards the centre of the flower. This is the female reproductive part of a flower. The gynoecium is a term given to a collection of pistils or carpals. It is made up of the following structures:

Based on the position of the ovary with respect to the other flower whorls, it can be classified into three types: 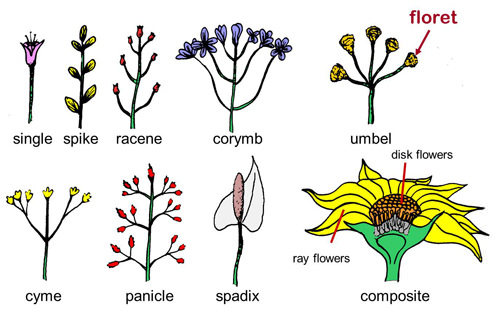 So far we have learned about single or solitary flowers. But, in many plants, the flowers exist in a bunch on a branch along the same or different floral axis. These clusters or bunches of flowers are known as an inflorescence. Though the overall structure of the flowers in an inflorescence remains the same as seen in a solitary flower, the arrangement of these clusters of flowers varies depending on the type of arrangement of the floral axis

Question: What is the inner layer of the protective covering of the pollen grain called?

Solution: Option A Intine. The inner layer of the protective coat of the pollen grain is the thin intine whereas the tough outer covering is called the exine.