Don’t beautiful and colourful flowers on plants and trees always please us? Did you know the flowers are the sexual organs of the body and help it to reproduce sexually? Plants can be unisexual and bisexual depending on the parts they contain. Let us understand these parts for plant reproduction in this section.

Parts of a Flower in Plant Reproduction

A bisexual flower typically contains the male and female parts in it. There are other supporting structures as well apart from the reproductive parts for sexual reproduction.

There are four main layers of the parts of a flower:

It is a collection of sepals. The sepals are the green coloured small florets that are considered the first layers of the flower from the base. In some cases, the sepals have colour. They are called petaloid. Their main function is to protect the flower while it is still in the bud stage.

This layer is a collection of petals. It is the second layer of the flower, superior to the calyx layer. The petals are the colourful part of a flower that helps to attract insects and birds to the flower to facilitate pollination.

It is the third layer of the flower superior to the Corolla. This is a term given to the male parts for sexual reproduction of a plant. The androecium is made up of a collection of stamens. Each stamen has the following parts:

A Gynoecium is a collection of carpels. It is the fourth layer of a flower. It has three parts:

Pollination and Fertilization in Plant Reproduction

The transfer of pollen grains from the anther of one flower to the stigma of the same or another flower is known as pollination. It can be caused by insects, birds, wind, water and animals including man. These are together called as pollinating agents.

Double Fertilization happens in angiosperms. This is because the male gamete that enters the ovule has two nuclei. One of the male gametes fuses with the female gamete to form a diploid zygote whereas the other one forms a triploid endosperm by fusing with the diploid polar nuclei. The zygote divides to form the future plant whereas the endosperm provides nutrition to the developing embryo. 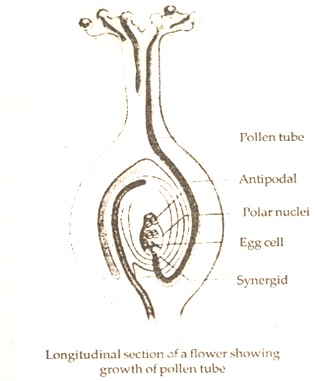 Events after Fertilization in Plant Reproduction

After fertilization, the ovary becomes the fruit and the ovules become the seeds. The other structures like the calyx, corolla and the remaining parts of the androecium and gynoecium degenerate or fall off.

Question: Which of the following is a triploid structure?

Solution: Endosperm. The male gamete that enters the ovule has two nuclei. One of the nuclei fuses with haploid male gamete to form a diploid zygote. The second male nucleus fuses with the diploid polar nuclei to form the triploid endosperm.