The Poisson Distribution is a theoretical discrete probability distribution that is very useful in situations where the discrete events occur in a continuous manner.  This has a huge application in many practical scenarios like determining the number of calls received per minute at a call centre or the number of unbaked cookies in a batch at a bakery, and much more.

In such cases, only the average number of successes (like the no. of calls received) for a sample space (like the duration of 1 hour) is known. It can sometimes range from 0 to the maximum value, but one doesn’t know how many times it’s going to be a failure (like you can’t know how many calls will not come at a call centre at a given hour).

In such cases, the Poisson Distribution is utilized to determine the probability of exactly x0 number of successes taking place in unit time. Let us now mention some conditions for a model to qualify for a Poisson Model before looking at the formulae for the distribution itself.

As we have hinted in the introduction, the calls received per minute at a call centre, forms a basic Poisson Model. Relating to this real-life example, we’ll now define some general properties of a model to qualify as a Poisson Distribution.

Let us first divide the time into n number of small intervals, such that n → ∞. We now define a success as a call received in a unit interval of time. Let p denote the probability of such a success. As you must have noted, we have already divided the time into infinitesimally small intervals; thus p → 0.

However, this must result in the condition that np = λ (a finite constant); because there definitely is a mean number of calls being received per unit time. This way we can understand the following properties of a Poisson Model –

Characteristics of the Poisson Distribution

⇒ It is uni-parametric in nature. As we can see, only one parameter λ is sufficient to define the distribution.

⇒ Depending on the value of the parameter λ, it may be unimodal or bimodal. Look at some cases given below for example – 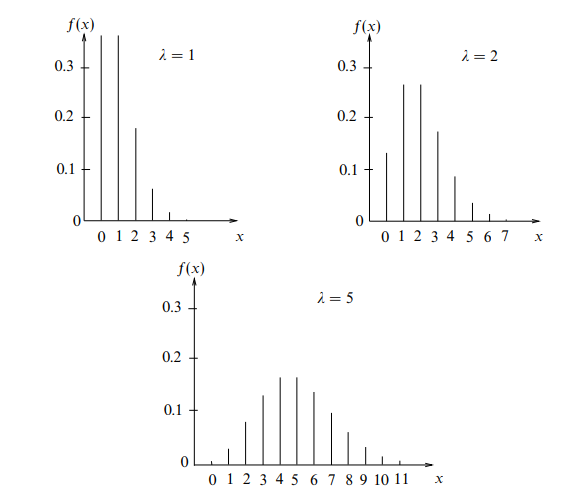 This illustrates that a Poisson Distribution typically rises, then falls. If λ is an integer, it peaks at x = λ and at x = λ – 1. Otherwise, it simply peaks at the integer part of λ.

Fitting a Poisson Distribution to Given Data

Note that the distribution may not exactly predict the observed frequency because the Poisson Distribution holds only for random variables assuming discrete values and whose occurrence is completely independent of any of its previous occurrences. Now go through the solved examples below to improve your understanding of the topic!

Solution: Let us first define the random variables that we need –

Since on an average, we expect the mean of X = 1 for every five minute-interval and the mean of Y = 2 for every five-minute interval, we can calculate the parameters of the Poisson Distribution satisfied by X and Y in the following way –

Since here we have to consider both types of emails received together, let us now define a third random variable Z = X + Y. It can be equivalently expressed as –

Now in this problem, we simply have to calculate Pr(Z ≥ 2). Using simple probability logic and the Poisson distribution, it can be calculated as –

The table below is the data collected from a group of 500 students. x represents the number of different foreign countries visited, and corresponding to it, the number of students is given. Fit the given data to a Poisson distribution and see the deviation from it.

Thus the variable X, if indeed it is random, can be expressed as –

Now according to the Poisson Distribution, let us find the values that Pr(X = x) will assume can be calculated as –

Thus you see that there indeed are some departures in the data from the ones calculated by the Poisson Distribution. Still, it is definitely a good approximation in certain situations.