Let us understand the concept of averages first. Let us say that you want to buy shoes for your friend but you don’t know their fit. What will you do? You can guess the size and see if your guess was accurate or not. What is the chance that you will be right? It is very small considering that there are a lot of sizes and only one range is true.

Now let us say that you want to buy shoes for every kid in your state. You can only select one size though. There will be thousands of such kids with a range of sizes. If you buy say size 8 shoes, what is the chance that those shoes will fit some kid? The chances are very high. How will you know which size will fit the most number of students?

The answer is the concept of averages. Out of a large set of data, the average is the number that represents most of the data values. Thus it is a measure of the “central” tendency. If you know the average of a data set, you will be able to know the behaviour or the approximate value of most of the data points.

Average value = (a + b + c + … )/n ;where n is the total number of observations. Let us see an example and then move on to the application of this concept. 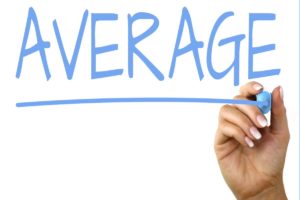 We can find the average of various sets of data. Out of these, some data collections may form an A.P. sequence or an arithmetic progression sequence. For such data collections, we can use the following rules. Let us see these rules with the help of an example.

Answer: The series is an A.P. with the common difference being = 3. The rue to find the average of an A.P. is that if the A.P. has even number of terms then the average = (sum of the two middle terms)/2 = (sum of the first and the last term)/2

These are the rules for an A.P. Sometimes, you will be given the average and asked to find the number of data points. For example, consider the following example:

Example 3: In a village, the average height of the males is found out to be 5.8 feet. If the males of the village were to be put one on top of the other such that there is no overlapping, they would reach a height of  11600 feet. How many men are there in the village?

Answer: This is an example where the average is already present and we have to find the number of observations. Since from the formula of the averages, we know that:

Q 1: The average of a number of terms is 8. If each term is added by 2, what is the new average of the data set?