Methanol or methyl alcohol is a chemical with the formula \(CH_3OH\). A methyl group that is linked to a hydroxyl group often abbreviated MeOH. Methanol is a polar solvent. Methanol got its other name as for wood alcohol. The reason behind this name was as methanol was once produced by the destructive distillation of wood. Nowadays, methanol is mainly produced industrially by hydrogenation of carbon monoxide.

Methanol consists of a methyl group attached to a polar hydroxyl group. More than 20 million tons of methanol are produced annually. Methanol is in use as a precursor to other commodity chemicals. For instance, these chemicals are methyl benzoate, formaldehyde, methyl tert-butyl ether, acetic acid, anisole, peroxy acids, and more with a host of more specialized chemicals. 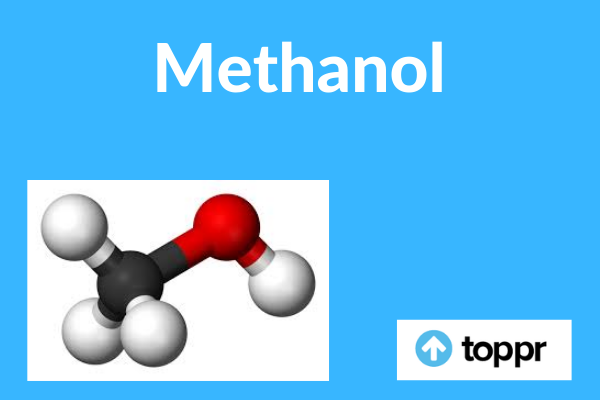 It is seen that small amounts of methanol are present in healthy human individuals. According to some studies a mean of 4.5 ppm in the exhaled breath of test subjects. Some amount of endogenous methanol in humans that is 0.45 g/d is metabolized from pectin which is found in fruit. Approximately one kilogram of apple produces up to 1.4 g of methanol. Methanol is produced by anaerobic bacteria and phytoplankton. In star-forming regions of space, methanol is found in abundant quantities It is also used in astronomy as a marker for such regions. Methanol is detected through its spectral emission lines.

Methanol is converted to formaldehyde. This is broadly used in many areas, especially polymers. The conversion entails oxidation:

Acetic acid can also be produced through methanol.

The process of condensation of methanol to make hydrocarbons and also aromatic systems is the basis of several technologies. All of them are related to gas and liquids. These encapsulate methanol-to-hydrocarbons (MTH), methanol to gasoline (MTG), and methanol to olefins (MTO), and methanol to propylene (MTP). These conversions are catalyzed with the use of zeolites as heterogeneous catalysts.

The European Fuel Quality Directive allows fuel producers to add up to 3 percent of methanol, with an equal amount of cosolvent, with gasoline sold in Europe. In China, people use more than 4.5 billion litres of methanol per year. They use it as a transportation fuel in low-level blends for conventional vehicles, and high-level blends in vehicles designed for methanol fuels.

Niche and Potential Uses of Methanol

Methanol is an energy carrier. The reason behind this is, being a liquid, it is easier to store as compared to hydrogen and natural gas. Its energy density is low reflecting the fact that it represents partially combusted methane. The energy density of methanol is 15.6 MJ/L, while ethanols is 24 and gasolines is 33 MJ/L.

Methanol is in use to fuel internal combustion engines. It easily burns by giving carbon dioxide and water.

Methanol fuel is proposed for ground transportation. The advantage of a methanol economy is that it can be adapted to gasoline internal combustion engines with minimum modification to the engines. Though the energy density of methanol is only half that of gasoline. This means that it is twice the volume of methanol would be required.

Methanol is an alternative fuel for ships. This fuel helps the shipping industry to meet increasing emissions regulations of the industry. Methanol reduces emissions of sulphur oxides \(SO_2\), nitrogen oxides \(NO_2\) and some particulate matter. Methanol can be in use with high efficiency in marine diesel engines after some modifications using a small amount of pilot fuel that is Dual fuel.

Carbon monoxide and hydrogen react on a catalyst to make methanol. The most broadly used catalyst is a mixture of copper and zinc oxides, supported by alumina. It was first used by ICI in 1966. At 5 to 10 MPa (50 to100 atm) and \(250^oC (482^oF)\), the reaction is characterized by high selectivity that is greater than 99.8%

According to the mechanism, this process occurs through the initial conversion of CO into \(CO_2\), which is then hydrogenated-

here the \(H_2O\) is recycled through the water-gas shift reaction

This gives an overall reaction as:

The catalytic conversion of methane into methanol is affected by enzymes including methane monooxygenases. These enzymes are mixed-function oxygenases that are oxygenation and is coupled with the production of water and \(NAD^+\).

Quality Specification and Analysis of Methanol

Methanol is easily available commercially with a range of purity grades. Commercial methanol is classified according to ASTM purity grades that are A and AA. Both the grades as if grade A and grade AA purity are 99.85% methanol by weight. Grade AA methanol has trace amounts of ethanol as well.

Methanol that is for chemical use corresponds to Grade AA. In addition to water or liquid, some of the typical impurities include acetone and ethanol are very difficult to separate by distillation. UV-vis spectroscopy is an appropriate method for detecting aromatic impurities. Water content in methanol can easily be determined with the use of Karl-Fischer titration.

Question 1: Is methanol an acid or base?
Answer: Methanol is both basic and acidic. According to the Bronsted-Lowry method, proton donors are acidic and proton acceptors are bases. Methanol is a proton donor. Methanol donates OH proton to heavy bases like sodium hydride relatively quickly.

Question 2: Why is methanol important?
Answer: In chemical synthesis pure methanol is an essential element. Methanol is also a high-octane i.e., clean-burning fuel which is a potentially important substitute for gasoline in automobile vehicles. Wood-derived methanol is primarily in use to make synthetic ethyl alcohol that is unsafe for drinking.

Question 3: Why methanol is dangerous?
Answer: Methanol is extremely poisonous and flammable. Direct ingestion of more than 10mL of methanol can cause permanent blindness because of optic nerve damage or may be central nervous system poisoning, coma and likely death. Such risks also occur when inhaling methanol vapours.