Nuclear energy is the energy that is present in the core of an atom. Here an atom is a small particle that constitutes every matter in the universe. Generally, the mass of an atom is concentrated at the centre of the nucleus.  Neutrons and Protons are the two subatomic particles that are with the nucleus. There is a massive amount of energy in bonds that bind atoms together. 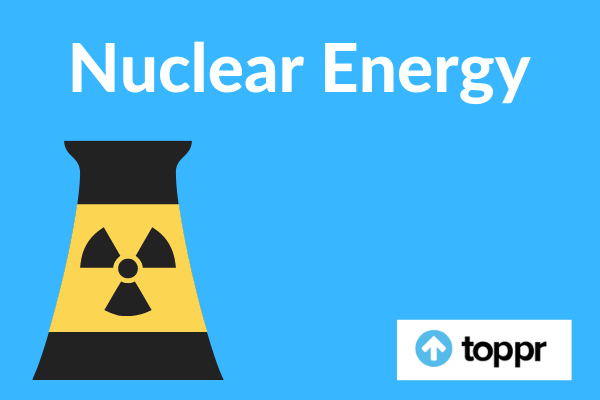 Nuclear Energy is released by nuclear reactions. This reaction can be either by fission or fusion. In a nuclear fusion, reaction atoms combine together to form a larger atom. In nuclear fission, the atoms divide to form smaller atoms by releasing energy. Nuclear power plants give energy using nuclear fission. The release or absorption of nuclear energy occurs usually in nuclear reactions or radioactive decay.

The known classes of exothermic nuclear transmutations are fission and fusion. Nuclear energy can be liberated by atomic fission when heavy atomic nuclei such as uranium and plutonium are broken apart into lighter nuclei. The energy from fission is in use to produce electric power in hundreds of locations worldwide. Nuclear energy also releases during atomic fusion.

When light nuclei, for instance, hydrogen are combined to form heavier nuclei like helium. The Sun and other stars use nuclear fusion to produce thermal energy. This energy is radiated from the surface. It is a type of stellar nucleosynthesis. In any exothermic nuclear process, nuclear mass is be converted to thermal energy that given off as heat.

Nuclear energy gives many benefits as the emissions-free workhorse of our energy grid. The unique value of nuclear energy cannot be found in any other source of energy.

4) Nuclear produces electricity reliably. Around-the-clock electricity is a must for our nation to prosper nuclear energy in the 21st century. Clean and reliable nuclear energy is a major part of U.S. infrastructure as if it runs nonstop for 18 months to 24 months at a time.

6) Also, nuclear protects our air. Nitrogen oxide, sulfur dioxide, particulate matter and mercury, all these chemicals are the one that should not be in the air we breathe. Nuclear energy provides power 24/7 without a trace of these pollutants.

Renewables work best when twinned with flexible technologies. It is only when they can pick up the strain at key times, such as cold, nights. Thou, Nuclear power stations are highly inflexible as if they are very difficult to turn up or down. That’s why these stations are a poor match for a grid that has lots of renewables.

Decommissioning a nuclear plant and disposing of its waste is complex, hazardous, and expensive.

The level of expertise and capital is required to make a nuclear power station. This means very few are capable of building it.

The radioactive wastes coming from stations are harmful to nature and humans.

Question 1: What is nuclear energy in simple words?

Answer: It is the energy that is present in an atom’s nucleus. Atoms are small units of the universe that make up all matter, and energy is the one that binds together the nucleus. The dense nucleus present in the atom is an immense quantity of energy.

Question 2: What is nuclear used for?

Question 4: What happens during nuclear fission in a nuclear plant?

A particular form of uranium that is uranium-235 is most commonly in use for energy production. The nucleus of uranium splits easily when it is bombarded by a neutron. Here’s what happens during a nuclear fission reaction: