Ethanol is a plant fermentation by-product. Ethanol is naturally produced by the fermentation of sugars by yeasts. It can also be produced through petrochemical processes such as the hydration of ethylene. Ethanol has medical applications as a disinfectant and antiseptic. It is useful as a chemical solvent and in the synthesis of organic compounds as well as an alternative fuel source. 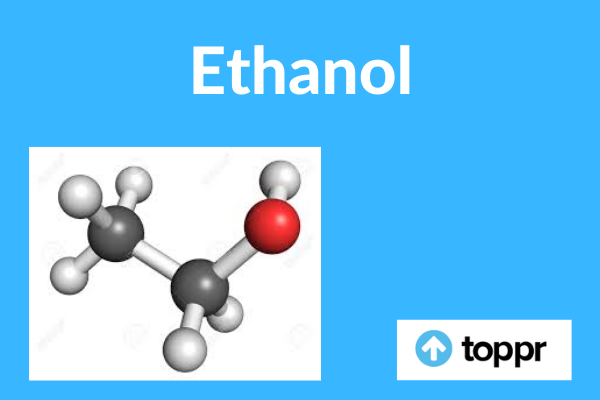 It is also called ethyl alcohol, grain alcohol, drinking alcohol, spirits, or simply alcohol. It is an organic chemical compound. Ethanol is alcohol with the chemical formula \(C_2H_6O\). The chemical formula of ethanol can also be written as \(CH_3-CH_2-OH, C_2H_5OH\), an ethyl group linked to a hydroxyl group.

The formula is often abbreviated as EtOH. Ethanol is volatile in nature, flammable, colorless liquid with a slight characteristic odour. Ethanol is a psychoactive substance, recreational drug, and the active ingredient in alcoholic drinks.

Ethanol is a by-product of yeast that is a metabolic process. As such, ethanol is present in any yeast habitat and also in overripe fruit. Ethanol produced by symbiotic yeast can be found in Bertam palm blossoms. It is also processed during the germination of many plants as a result of natural anaerobiosis. Ethanol is detected in outer space, forming an icy coating around dust grains in interstellar clouds. Minute quantity amounts of endogenous ethanol and acetaldehyde were found in the exhaled breath of healthy volunteers.

At room temperature, Ethanol is always a liquid. Ethanol has a melting point of 156K and a boiling point of 351K. Ethanol is one of the most active ingredients of all alcoholic drinks. It is also used in making different medicines such as cough syrups, tonics as well as tincture iodine as it is a very good solvent. Any proportion of ethanol is perfectly soluble in water.

Furthermore, the consumption of even a small quantity of pure ethanol is dangerous. Consumption of alcohol for a long period may cause diseases and adverse health effects. Ethanol when oxidised with monatomic oxygen, yields ethanoic acid. Ethanol is a combustible material. It produces carbon dioxide, water, heat, and light when burnt in the presence of oxygen.

Ethanol is a versatile solvent that means it is miscible with water. It is also miscible with many organic solvents, including acetic acid, acetone, benzene, carbon tetrachloride, chloroform, diethyl ether. Also, ethylene glycol, glycerol, nitromethane, pyridine, and toluene. Ethanol’s main use as a solvent is in making a tincture of iodine, cough syrups etc. Ethanol is also miscible with light aliphatic hydrocarbons, such as pentane and hexane, and with aliphatic chlorides such as trichloroethane and tetrachloroethylene.

In the medical field, Alcohol is used within medicine in various forms as an antiseptic, disinfectant, and antidote. Alcohol is applied to the skin is used to disinfect the skin before a needle stick and before surgery. Alcohol may be used both to disinfect the skin of the person and the hands of the healthcare providers. It can also be used to clean other areas and in mouthwashes. Ethanol is in use to treat methanol or ethylene glycol toxicity when fomepizole is not available.

It is useful in the medical field as medical wipes and most commonly in antibacterial hand sanitizer gels as an antiseptic for its bactericidal and anti-fungal effects. Ethanol kills microorganisms by dissolving the membrane lipid bilayer of microorganisms and denaturing their proteins. It is also effective against most bacteria and fungi and viruses. Ethanol is in use as an antidote to ethylene glycol poisoning and methanol poisoning.

In the cosmetics and beauty products industry, ethanol is a common ingredient when it comes to lotions as preservatives for helping the skin. Ethanol in paints is in use as preservatives because it is an effective solvent and also in cleansing products for preventing a breach of organisms. It is used as a colour additive and is also used for giving an enhanced flavour. It is in use in gasoline for preventing the knocking of engines and maintenance of drivability.

Ethanol is an intoxicating agent. When people drink ethanol, the liver cannot purify or filter all of it at once at a moment. Hence ethanol flows to different parts of the body including the brain and more. As ethanol reaches the brain, the compound obstructs the gaps that are between the neurons in the brain. As the neurons cannot function properly after taking ethanol, people become slower.

Their speeches become stain and their bodies fail to maintain a proper neuron functioning of the body. Moreover, the reward centre of the brain gets trigger upon drinking alcohol and dopamine releases. This tricks the brain into thinking that ethanol is something good because it is making the people happy and energetic. And people keep on drinking ethanol.

Drinking ethanol can cause a lot of undesired effects on the body. In addition to that, because of the impairment of the proper functions of the body and brain, drinking ethanol leads to accidents. A few hours of happiness can give you whole life’s pain.

Question 1: What are the solvent properties of ethanol?

Answer: It is a versatile solvent and is easily miscible with water. It has other organic solvents, including acetone, carbon tetrachloride, ethylene glycol, chloroform. Also, benzene, diethyl ether, glycerol, pyridine, nitromethane, and toluene. The light aliphatic hydrocarbons, such as pentane and hexane, and aliphatic chlorides such as tetrachloroethylene and trichloroethane are often miscible with this compound.

Question 2: What are the Properties of Ethanol?

Answer: The important properties of ethanol are:

Answer: Though ethanol is widely in use, it is a dangerous chemical. Ethanol is highly flammable. As such, it has exact flashpoints which are very important to know while using it. Although ethanol is in use in alcoholic drinks, the ingestion of pure ethanol alone can cause coma and death.

Question 4: What are the uses of ethanol?

Answer: Ethanol is a very important industrial chemical that is in use as a solvent in the synthesis of other organic chemicals. It is also in use as an additive to gasoline in the automotive industry for forming a mixture called gasohol. Ethanol is the key component in almost all alcoholic drinks such as beer, wine, and spirits. It is also in use in the cosmetics and beauty products industry, paints, as a colour additive, Antidote, Antiseptic.