Ester is a chemical compound. It is made from either an organic acid or inorganic acid, during which a minimum of one –OH (hydroxyl) group is replaced by an –O–alkyl (alkoxy) group. Usually, esters are derived from the substitution reaction of an acid and an alcohol. Glycerides, which are carboxylic acid esters of glycerol, are important esters in biology. Esters with low relative molecular mass are commonly used as fragrances and located in essential oils and pheromones. The word ester is given by German chemist Leopold Gmelin in 1848. 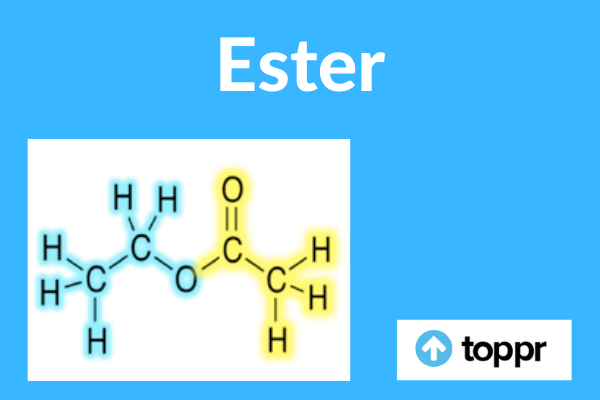 It is a compound that forms simply by replacing the hydrogen of an acid with an alkyl or other organic group. Many present fats and essential oils are esters of fatty acids. Esters acts as a good-quality solvent for plasticizers, plastics, and lacquers and has a sweet odour. They’re also one of the most important classes of synthetic lubricants on the commercial market.

German chemist Leopold Gmelin, given us the term ester within the half of the 19th century. Ester name comes from the parent alcohol and therefore the parent acid. All esters have been named using the systematic IUPAC name, supported the name for the acid followed by the suffix “-oate.” Simple esters have been called using their common name only. The chemical formula of organic esters is usually written as \(RC0_{2}R’\).

IUPAC nomenclature – Ester names are derived from the parent alcohol and therefore the parent acid, where the latter could also be organic or inorganic. Esters which forms from the only carboxylic acids has commonly more traditional names, known as “trivial names”. For example of acetate, formate, butyrate and propionate is written as ethanoate, methanoate, butanoate and propanoate. Esters derived from more complex carboxylic acids are, on the opposite hand, more frequently named using the systematic IUPAC name.

Orthoesters – Orthoesters are an uncommon class of organic esters. It comes with the formula \(RC\left ( OR’ \right )_{3}\).

Esters are strong polar than ethers but less than alcohols. They take part in hydrogen bonds as hydrogen-bond acceptors, but cannot act as hydrogen-bond donors, unlike their parent alcohols. Due to their lack of hydrogen-bond-donating ability, esters don’t self-associate. Consequently, esters are more volatile than carboxylic acids of comparable relative molecular mass.

Ester is detected through gas chromatography, taking advantage of their volatility. The IR spectra for Esters show an intense sharp band within the range \(1730–1750 cm^{-1}\) assigned to \(V_{c=0}\). This peak changes counting on the functional groups attached to the carbonyl.

Esters contain a carbonyl centre, which provides rise to 120° C–C–O and O–C–O angles. The structure of the ester contains a flexible functional group because the rotation about the C–O–C bonds features a low barrier. Their flexibility and low polarity are manifested in their physical properties; they have a tendency to be less rigid (lower melting point) and more volatile (lower boiling point) than the corresponding amides.

Esterification is the name given for a reaction during which two reactants usually alcohol and an acid to form an ester as a reaction product. Esters are common in chemistry and biological materials, and sometimes have a pleasing characteristic, fruity odour. This results in their extensive use within the fragrance and flavour industry.

This below synthesis process is the Fischer esterification. This involves treating an acid with alcohol within the presence of a dehydrating agent:

The constant for such reactions is about 5 for typical esters.

Esterification of a carboxylic acid is done upon treatment with epoxides, thus giving β-hydroxy esters:

This reaction is in use within the production of vinyl ester resin resins from propenoic acid.

Transesterification is a process that sees changing of one ester into another one.

Like the hydrolysation, acids and bases act as a catalyst in transesterification. The reaction is very important for degrading triglycerides, e.g. within the production of carboxylic acid esters and alcohols.

Alkenes undergo “hydroesterification” within the presence of metal carbonyl catalysts. Below is the process through which esters of propionic acid are commercially prepared by this method:

The production of methyl propionate is one illustrative example.

The Tishchenko reaction follows the disproportionation of an aldehyde under the presence of an anhydrous base to produce an ester. Catalysts are aluminium alkoxides or sodium alkoxides. The reaction between benzaldehyde and sodium benzyl oxide (generated from sodium and benzyl alcohol) gives benzyl benzoate. This tactic is employed within the production of ethyl acetate from acetaldehyde.

Esters react with nucleophiles at the carbonyl carbon. Carbonyl is weakly electrophilic. Hence it is attacked by strong nucleophiles (amines, alkoxides, hydride sources, organolithium compounds, etc.). The C–H bonds which are adjoining to the carbonyl are weakly acidic in nature but still, it undergoes deprotonation with strong bases. This process is the one that sometimes initiates condensation reactions.

Esters are relatively immune to reduction. The fatty acid esters are hydrogenated to fatty alcohols. A typical catalyst is copper chromite.

Especially for fine chemical syntheses, lithium aluminium hydride is employed to scale back esters to 2 primary alcohols. As the intermediate hemiacetal tends to decompose to offer alcohol and an aldehyde, so direct reduction to offer the corresponding ether is difficult.

Esters are widespread in nature and are widely utilized in industry. Fats in nature are generally triesters that are extracted from glycerol and fatty acids. Esters are liable for the aroma of the many fruits, including apples, durians, pears, bananas, pineapples, and strawberries. For global use, several billion kilograms of polyesters are produced industrially annually. Among the important products being polyethene terephthalate, acrylate esters, and cellulose ester.

Answer – All fats and oils are naturally occurring esters, and form from condensation reactions between the alcohol glycerol and different long-chain carboxylic acids (fatty acids).

Answer – Esters smell partly because they exhibit weak intermolecular forces and they are volatile. Thus, ester molecules are able to enter the gas phase easily and reach your nose.

Answer – Esters are made by reacting alcohols and carboxylic acids together in a condensation reaction. So, we can eat esters in microgram amounts and it occurs naturally in all fruits, vegetables, herbs and spices.