Acetaldehyde is a common name of ethanal. Acetaldehyde is an organic chemical compound with the chemical formula \(CH_3CHO\). It is also abbreviated by chemists as MeCHO where ‘Me’ means methyl. Acetaldehyde is one of the most important aldehydes. It is being produced on a large scale in many industries. Acetaldehyde occurs widely in nature as in coffee, bread, and ripe fruit and is produced by plants. It is also contributing to the cause of hangover after alcohol consumption. Pathways of exposure to acetaldehyde include air, water, land, or groundwater, as well as drink and smoke. Consumption of disulfiram inhibits acetaldehyde dehydrogenase. It is the enzyme that is responsible for the metabolism of acetaldehyde.

Acetaldehyde is easily miscible with naptha, gasoline, xylene, ether, turpentine, alcohol and benzene. It is a colourless, flammable liquid and has a suffocating smell. Acetaldehyde is non-corrosive to many metals but when it has a narcotic action, it can cause mucous irritation. It was observed by the Swedish pharmacist/chemist Carl Wilhelm Scheele in the year 1774. 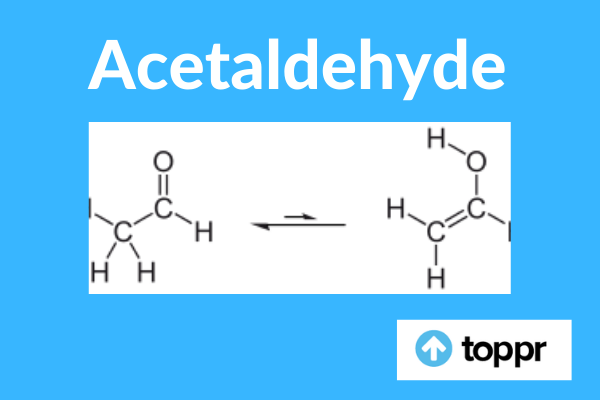 A small quantity of acetaldehyde can be prepared by the partial oxidation of ethanol. It is an exothermic reaction and is conducted over a silver catalyst at about \(500^oC\) to \(650^oC\).

It is the oldest method for the preparation of acetaldehyde.

The mechanism involves the intermediacy of vinyl alcohol that is tautomerized to acetaldehyde. The reaction is conducted at \(90^oC\) to \(95^oC\). Acetaldehyde formed here is separated from water and mercury and cooled to \(25^oC\) to \(30^oC\). In the wet oxidation process, iron (III) sulfate is in use to reoxidize the mercury to the mercury (II) salt. The resulting iron (II) sulfate is then oxidized in a separate reactor with nitric acid.

The uses of Acetaldehyde are:

Question 1: How does acetaldehyde affect the liver?

Answer: It is a major toxic metabolite. Acetaldehyde is one of the main compounds that is mediating the fibrogenic and mutagenic effects of alcohol in the liver. Basically, it promotes the formation of adducts that are leading to functional impairments of key proteins, including enzymes, and DNA damage and this promotes mutagenesis.

Question 2: What is the difference between formaldehyde and acetaldehyde?

Answer: The iodoform test is in use to differentiate between formaldehyde and acetaldehyde. Methyl ketones react to yellow precipitate by giving iodine and potassium hydroxide whereas, acetaldehyde binds to the carboxylic acid with iodine and KOH to give sodium salt. It is noteworthy that formaldehyde does not screen for iodoformity.