Salicylic acid is lipophilic monohydroxybenzoic acid. Salicylic acid a type of phenolic acid and a beta-hydroxy acid (BHA). Beta hydroxy acid is found as a natural compound in plants. This colourless crystalline organic acid is broadly in use in organic synthesis. It is derived from the metabolism of salicin. Salicylic acid is a crystalline organic carboxylic acid and has keratolytic, bacteriostatic and fungicidal properties. It is poisonous to our body when consumed in large. It can be in use as an antiseptic and as a food preservative when consumed in small quantities. Salicylic acid has a carboxyl group attached to it i.e., COOH. It is odourless and is colourless. 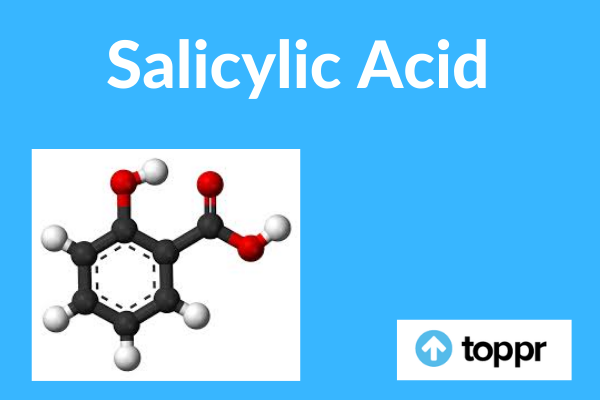 All carbon atoms present in the benzene ring of salicylic acid are \(sp^2\) hybridized. Salicylic Acid forms an intramolecular hydrogen bond. In an aqueous solution, salicylic acid dissociates to lose a proton from the carboxylic acid. The resulting carboxylate ion i.e., \(-COO^-\) undergoes intermolecular interaction with the hydrogen atom of the hydroxyl group i.e., -OH. It leads to the formation of an intramolecular hydrogen bond.

Methods of Preparation of Salicylic Acid

From Phenol: When phenol is reacted with sodium hydroxide, it forms sodium phenoxide. Sodium phenoxide then undergoes distillation and dehydration. This process is followed by a carboxylation reaction with carbon dioxide, which results in the formation of sodium salicylate i.e., salt of salicylic acid. This salt then further reacted with an acid or hydronium ion or any species that denotes a proton to obtain the salicylic acid.

Esterification Reaction: Since salicylic acid is an organic acid, it undergoes a reaction with organic alcohol groups to produce a new organic chemical class alike ester. When salicylic acid is reacting with methanol in an acidic medium preferably sulphuric acid in the presence of heat, a dehydration reaction occurs with the loss of water \(-OH^-\) ion. This ion is lost from the carboxylic acid functional group present in the salicylic acid molecule and the \(H^+\) ion is lost from the deprotonation of the methanol molecule, resulting in the formation of methyl salicylate (an ester).

Salicylic acid is in use in the treatment of wart infections. The mechanism by which professionals treats warts infection is similar to its keratolytic action. Firstly, it dehydrates the skin cells that are affected by warts and thereby it gradually leads to its shedding off from the body. It also activates the immune reaction of the body towards the viral wart infection by initiating a mild inflammatory reaction.

Salicylic acid is one of the major components of anti-dandruff shampoos. This acid also helps in clearing away the dead and flaky skin cells from your scalp.

Salicylic acid also in use as a mild antiseptic effect known as a bacteriostatic agent. It does not kill the existing bacteria and hence not an antibacterial agent but prevent the growth of bacteria wherever applied.

Question 1: What are the uses of salicylic acid?

Answer: Salicylic acid acts as a keratolytic i.e., it serves as a peeling agent. Salicylic acid makes the outer layer of the skin shed. Salicylic acid is in use to treat acne, dandruff, seborrhea, or psoriasis and to remove cotton, calluses, and warts. It is also in use in many daily use products.

Question 2: What does salicylic acid do to your skin?

Answer: Salicylic acid works by loosening and breaking apart desmosomes in the outer layers of the skin. Desmosomes are the attachments between cells. This loosening and breaking action help the skin to exfoliate and the pores to unclog. Salicylic acid is capable of reducing sebum secretion, this reducing capability is another way to help reduce acne.

Answer: The use of low-concentration household salicylic acid products is usually safe. But salicylic acid may cause mild chemical burns at high concentrations. These chemicals can also cause dangerous intoxication in the body if ingested.