The different reactions we learn in organic chemistry are not just limited to books. If you delve a little you will get to know these reactions happen in our common day to day life or it may be a part of the processes living organisms undergoes. Similarly, different nucleophile and the corresponding reactions help in the biological synthesis of compounds in metabolic processes of living organisms.

The reactions also form part of the pharmaceutical preparation processes in industries and academia. The reaction helps in the formation of new complex organic chemicals. Therefore, nucleophilic addition reactions are central to organic chemistry. 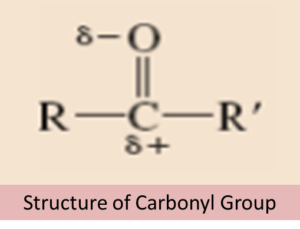 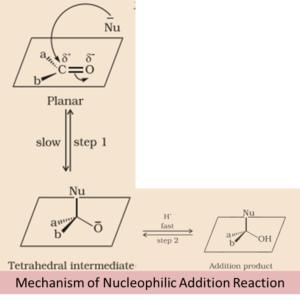 However, the majority of characteristics reactions of aldehydes and ketones involve a nucleophilic addition to the carbonyl group. The general equation of the aldehyde and ketone are 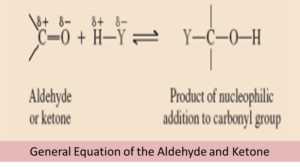 Reactivity of Aldehydes and Ketones

Aldehydes are more reactive and readily undergo nucleophilic addition reactions in comparison to ketones. Aldehydes demonstrate more favourable equilibrium constants for addition reactions than ketones because of electronic and steric effect. In the case of ketones, two large substituents are present in the structure of ketones which causes steric hindrance when the nucleophile approaches the carbonyl carbon.

However, aldehydes contain one substituent and thus the steric hindrance to the approaching nucleophile is less. Moreover, electronically aldehydes demonstrate better reactivity than ketone. This is because ketones contain two alkyl groups which decrease the electrophilicity of carbonyl carbon atom more than aldehydes.

Aldehydes and ketones undergo reaction with HCN to produce cyanohydrins. The reaction progresses very slowly by using pure hydrogen cyanide. Hence, base as a catalyst helps to speed up the reaction. This is because catalysis helps in the generation of cyanide ion (CN) which acts as a stronger nucleophile and adds to carbonyl compounds to produce the corresponding cyanohydrin. Cyanohydrins are important synthetic intermediates.

Mechanism of the Reaction

Due to the electronegativity difference in carbon atoms and oxygen atoms, the C=O bond demonstrates a polar behaviour. This, in turn, results in gaining of partial negative charge on the oxygen atom and partial positive charge on the carbon atom. The partial positive charge of the carbon atom will attract the cyanide ion of H+CN−. The double bond of C=O will break and a new C-CN bond development occurs. Furthermore, the unstable oxygen will attract the H+ of Hydrogen cyanide. 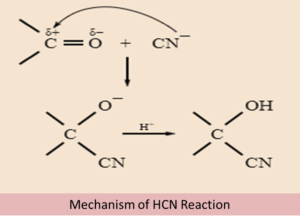 The hydrogen sulphite compound form from the sodium hydrogen sulphite addition is water soluble. Therefore, it can be converted back to parent carbonyl compound by treatment of the compound with dilute mineral acid or alkali. The reaction is also useful for the purification and separation processes of aldehydes. 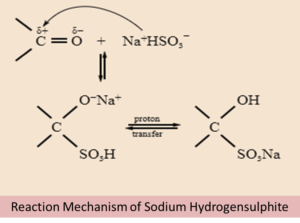 The dry hydrogen chloride present in the reaction protonates the oxygen atom present in the carbonyl structure thereby increasing the electrophilicity of the carbonyl carbon. Thus, it helps in the nucleophilic attack of ethylene glycol. Further hydrolysis of acetals and ketals with mineral acids (aqueous) will help in retrieval of respective aldehydes and ketones. 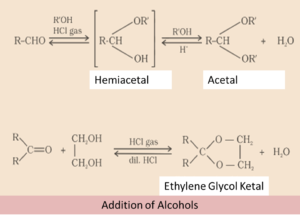 Similarly, ketones react with dihydric alcohols to produce cyclic ketals. Dry HCl gas helps in shifting the equilibrium of the reaction to the right-hand side. Furthermore, hydrolysis of acetals and ketals and aqueous mineral acids help in retrieving the aldehydes and ketones.

Grignard Reagents or R-MgX demonstrates polar nature. In this compound, the carbon atom is electronegative in nature and the Mg atom is electropositive in nature. The polar nature of the Grignard Reagents helps the compound reacts with aldehydes and ketone to produce additional products. The addition products undergo decomposition reaction to give alcohol with water or dilute sulphuric acid.

Necessary Points to Note in this Reaction

If Grignard Reagent reacts with formaldehyde (HCHO), the reaction will form primary alcohol as the product.

If the reagent reacts with aldehydes other than HCHO, the reaction will produce secondary alcohols.

Ketone reaction with the reagent will produce tertiary alcohols.

Addition of Ammonia and Derivatives

Many nucleophiles like ammonia and derivatives of ammonia (H2N-Z) can also be added to the carbonyl group of aldehydes and ketones. The reaction of ammonia and its derivatives is reversible and the reaction happens in the presence of acid to form addition products. The reaction equilibrium will help the product formation because of fast dehydration of the intermediate complex. Thus, the reaction finally forms the compound >C=N-Z. In the structure >C=N-Z, Z can be alkyl, OH, aryl, NH2, NHCONH2, C6H5NH, etc.

Generally, we use weak acids as catalysts in the addition reaction of aldehydes and ketones with ammonia and its derivatives. The carbonyl group in aldehydes or ketone contains lone pair which reacts with weak acids. Refer to the example below. The product formed in the reaction will show resonance. 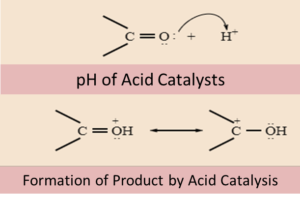 The resonance of the product will increase the positive charge on carbonyl carbon. This makes the carbon prone to a nucleophile attack thus favouring the reaction. However, the reaction is possible pH 4 to 5 only. Hence, the reaction is pH dependent.

The reason for a restricted pH is because if the pH is very low then the ammonia derivative will form their respective salts due to their basic nature and at the same time will lose their nucleophilic nature. If the pH is high then the carbonyl group will not be able to undergo sufficient protonation.

Few reactions with different derivatives of ammonia are given below

Aldehydes and ketones undergo reaction with hydroxylamine (NH2OH) and lead to the formation of oximes.

Share with friends
Previous
Resources
Next
Glycolysis and Fermentation