The hydrosphere is the combined mass of water that is found on, under, and above the surface of a planet, minor planet, or natural satellite. Although Earth’s hydrosphere is around for about 4 billion years, it continues to change in shape. This change is caused by seafloor spreading and continental drift, that rearranges the land and ocean. Learn the Importance of Hydrosphere here.

It has been estimated that 1,386 million cubic kilometres or 333,000,000 cubic miles of water are present on the earth. This water is in liquid and frozen forms present in groundwater, oceans, lakes and streams. Saltwater accounts for 97.5%, whereas freshwater accounts for only 2.5 per cent. Out of this freshwater, 68.9 per cent is in the form of ice and permanent snow cover in the Arctic, the Antarctic and mountain glaciers. 30.8 per cent is in the form of fresh groundwater; and only 0.3 per cent of the fresh water on Earth is easily accessible from lakes, reservoirs and river systems. 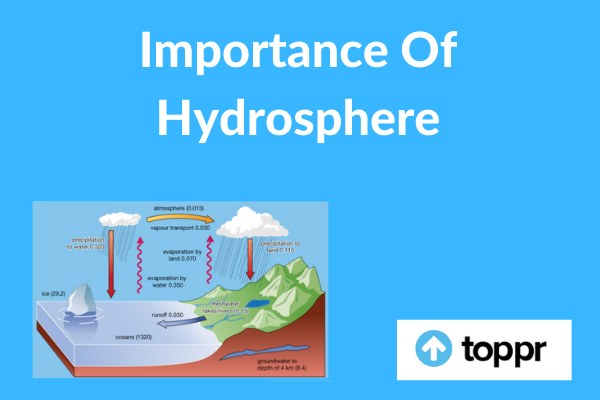 Why is the Hydrosphere Important?

Every cell in a living organism is built up of about 75% of water. It allows the cell to function appropriately. Cells would not able to carry out their normal functioning and the life of a cell cannot exist without water.

Hydrosphere provides a place for many plants and animals to survive. Many gases like \(CO_2\), \(O_2\), nutrients like ammonium and nitrite \(NO_2^-\) as well as other ions that are dissolved in water. The presence of these substances is important for life to exist in water.

The specific heat of water is its unique characteristics. This shows that water takes a lot of time to heat up and a lot of time to cool down. This helps in regulating temperatures on earth. This is because they stay in a range that is acceptable for life on earth to exist.

FAQs on Importance of Hydrosphere

Question: What is the amount of water present in the hydrosphere?