Chemically, there are two types of atoms that form methane, namely, carbon and hydrogen. One number of carbon atom combines with four numbers of hydrogen atoms to form one molecule of methane. Therefore, the formula of methane is \(CH_{4}\). Methane is produced both biologically and geologically in nature. Geologically, it occurs below the ground and seafloor. Another source of methane is crude oil. 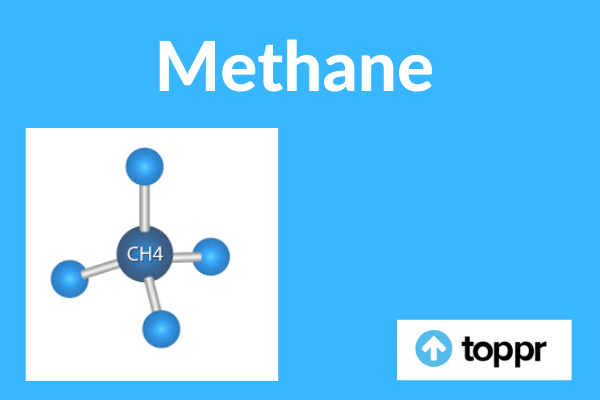 In nature, methane is available, abundantly. In a biological system, methane gas is produced in marshy/swampy lands by anaerobic bacterial decomposition of vegetables and biological wastes. Therefore, wetlands are major sources of production of methane. Because of this source of the produce of methane, it is also known as marsh gas. Other sources include volcanoes, termites (methane produced during digestive processes), vent in the ocean floor, etc.

Methane is the major constituent of liquefied Natural Gas (LNG) which contains 50 to 90% of it and it is also the major constituent of biogas produced in the biogas plants used as a fuel for cooking in the rural area. In nature, the production of methane is through the biogenic process and this process is known as methanogenesis. The final step of methanogenesis is as under:

Chemically, methane can be produced by heating hydrogen gas and carbon monoxide gas at 573 K temperature in presence of a nickel catalyst. Fractional distillation of natural gas gives the pure form of methane.

1) Methane is the simplest hydrocarbon and is a colourless and odourless gas at room temperature and pressure. Methane is also known as marsh gas or methyl hydride. While storing in the cylinders for usage and transportation, methane is mixed with odorant, tert-butylthiol, to find out the leakage, it occurs, as a safety measure. Under prolonged exposure to heat, these containers can explode and can create damages. Therefore, cylinders or containers containing methane should be kept in a dark and cool place to avoid un-happenings.

2) Methane is formed by four covalent sigma bonds between carbon and hydrogen, C-H and it has a tetrahedral molecular structure. The covalent bonds are formed by sharing the electrons freely available in the outermost orbit of an atom.

3) The melting point of methane is 90.7 K and the boiling point is 111.6 K. It is lighter than air and has a specific gravity of 0.554. It is slightly soluble in water and completely soluble in organic solvents like ethanol, diethyl ether, benzene, toluene, etc.

4) Also, it forms an explosive mixture with air when its percentage reaches between 5 to 10% with air, by volume. Because of its explosive behaviour with air, in the coal mines before entering the mines gases are removed by blowing fresh air. On controlled burning of methane, flames are pale yellow, slightly luminous and very hot. This nature of methane makes it useful in the generation of steam which, in turn, used to run the turbine to generate electricity.

We can categorize the chemical properties of methane under the following headings:

Combustion: When the reaction of methane occurs with oxygen, it releases a substantial amount of heat (891 \(\frac{KJ}{mol}\). This reaction happens in the following way,

Selective Oxidation: The purpose of selective oxidation of methane is to produce methanol. This reaction occurs in the presence of catalysts. Though the reaction of methane with oxygen is difficult to control and even in the presence of an insufficient amount of oxygen, methane, ultimately, reacts with it to form carbon dioxide and water as an end product. To produce methanol, natural gas (containing 50 to 87% of methane) is reformed, converted and distilled the synthesized gas to get the pure methanol.

Steam reforming: Steam reforming of methane is useful when we have to produce hydrogen from hydrocarbons. For this purpose, natural gas is used and the reaction that occurs in this process is as below:

Answer: Methane is the first member in the series of saturated straight hydrocarbons. These types of hydrocarbons are also known as paraffin. Methane is the major part of natural gas and is available in nature, abundantly. Methane is a colourless and odourless gas and occurs in gaseous form at room temperature and pressure. It is soluble in organic solvents like ethanol, methanol, benzene, toluene, etc. Methane is less soluble in water. The chemical formula of methane is \(CH_{4}\).

Q.2: How much dangerous is the use of methane?

Answer: Methane can affect the human body when inhaled excessively. A very high level of methane in closed areas decreases the level of oxygen which causes suffocation, headache, dizziness, vomiting, loss of coordination and judgement, nausea and loss of consciousness. If the level of concentration of methane increases 5 to 14% by volume in air, it becomes explosive. These types of explosions are frequent in coal mines and collieries. Therefore before entering the mines fresh air is passed to lower the concentration of methane.

Q.3: Does methane exist in our solar system apart from the Earth?

Answer: Yes. Methane occurs in our solar system’s other planets and some large moons of the planets. In the approach to the planet Mars, methane is being proposed to be used as rocket propellant on future Mars missions as this gas can be extracted and synthesized on the planet for in situ utilization. As methane can be produced by a non-biological process and this process is called Serpentinization and synthesizing methane on Mars can give fuel to return to the Earth.