+Sucrose is common sugar. It is a disaccharide, a molecule composed of two monosaccharides are glucose and fructose. In plants, sucrose is naturally produced, from which table sugar is refined. 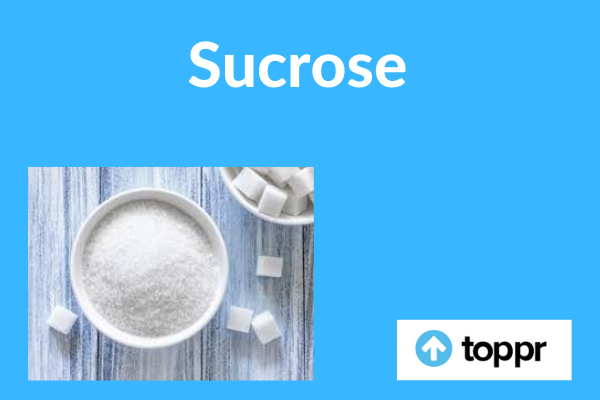 Sucrose has the molecular formula \(C_{12}H_{22}O_{11}\). As per human consumption, sucrose is extracted and refined from either sugarcane or sugar beet. Sugar mills are typically located in tropical regions near where sugarcane is grown – crush the cane. Basically, it produces raw sugar that is shipped to other factories for refining into pure sucrose.

Sugar beet factories are located in temperate climates. It is a place where the beet is grown and processed and then the beets directly into refined sugar. The refining process of sugar involves washing the raw sugar crystals before dissolving them into a sugar syrup. This sugar syrup is filtered and then passed over carbon to remove any residual colour.

The sugar syrup is later concentrated by boiling syrup under a vacuum. It is then crystallized as the final purification process to produce crystals of pure sucrose. These crystals are clear, odourless, and sweet. Sugar is usually added ingredient in food production and food recipes. About 185 million and more tonnes of sugar are produced worldwide.

In nature, sucrose is mainly present in many of the plants, and in particular their roots, fruits and nectars. It serves as a way to store energy, primarily from photosynthesis. Many mammals, birds, insects and bacteria accumulate and feed on the sucrose in plants and also for some it is their main food source. Seen from a human consumption perspective, honeybees are important because they accumulate sucrose and produce honey. It is an important foodstuff all over the world. The carbohydrates in honey itself consist of fructose and glucose with trace amounts of sucrose only.

As fruits ripen, their sucrose content usually rises sharply, but there are some fruits that contain almost no sucrose. These fruits are grapes, cherries, blueberries, blackberries, figs, pomegranates, tomatoes, avocados, lemons and limes. Though, with the emergence of industrialization, it has been increasingly refined and consumed in all types of processed foods.

The glycosidic linkage in sucrose connects the two carbohydrate groups. There are no anomeric hydroxyl groups in a sucrose molecule. Therefore, sucrose can is classified as a non-reducing sugar as it does not act as a reducing agent.

When sucrose is heated to temperatures above 186 degrees Celsius, sucrose undergoes a decomposition reaction to give rise to caramel. Similar to other carbohydrates, sucrose undergoes combustion in the presence of oxygen to yield water \(H_2O\) and carbon dioxide \(CO_2\) as the products. Sucrose reacts with potassium nitrate that is a powerful oxidizing agent with the chemical formula KNO3 to yield a special type of fuel called rocket candy. The chemical equation for the reaction between sucrose and potassium nitrate is

Also, sucrose undergoes a combustion reaction with chloric acid to yield hydrochloric acid, water, and carbon dioxide. This reaction can be represented by the following chemical equation:

Dehydration of Sucrose with Sulfuric Acid

Sucrose is subjected to the process of dehydration in the presence of sulfuric acid to get a black solid that is rich in carbon. The idealized chemical equation for this process.

It should be noted that a small amount of \(SO_3\) can be produced in this process.

Hydrolysis of sucrose breaks the glycosidic bond in sucrose converting it into glucose and fructose. It is so slow that solutions of sucrose can sit for years with negligible change. If the enzyme sucrase is added to the reaction, the reaction will proceed rapidly. The process of hydrolysis is accelerated with the help of acids, such as cream of tartar or lemon juice, both weak acids. Also, gastric acidity converts sucrose into glucose and fructose during digestion. The bond between them is an acetal bond which can be broken by an acid.

Synthesis and Biosynthesis of Sucrose

The biosynthesis of sucrose proceeds through the precursors UDP-glucose and fructose 6-phosphate. It is catalysed by the enzyme sucrose-6-phosphate synthase. The energy for the reaction completion is gained by the cleavage of uridine diphosphate (UDP). Sucrose is produced by plants, algae and cyanobacteria but not by other organisms. Sucrose is the product of photosynthesis. It is found in many food plants along with the monosaccharide fructose. In many fruits like pineapple and apricot, sucrose is the actual and main sugar.

Some uses of sucrose are as follows

Question 1: Is sucrose soluble in ethanol?
Answer: Sugar or sucrose is slightly soluble in ethanol. In addition to it, if the alcohol is cold it will dissolve even less of the sucrose. The sugar that is not dissolved within the ethanol settles at the bottom of the bottle. The salt is also very water-soluble.

Question 2: What is the function of sucrose in plants?
Answer: Sucrose is the most common type of carbohydrate in use for the carriage of carbon in a plant. Sucrose can be dissolved in water, thus retaining a stable structure of itself. Sucrose is then be transported into the phloem by plant cells, the special vascular tissue intended for sugar transport.