Sodium hydroxide is a chemical compound having the formula \(NaOH\). It’s also referred to as sodium hydroxide. It’s white in colour and consists of sodium cations \(Na^{+}\) and hydroxide anions \(OH^{-}\). Other names of sodium hydroxide are Ascarite, White caustic, Sodium hydrate. Its formula is NaOH and having a molar mass of \(39.9971 g mol^{-1}\). It appears as a white, waxy, opaque crystal and has no odour. It’s density is \(2.13 \frac{g}{cm^{3}}\). It’s soluble in glycerol, negligible in ammonia, insoluble in ether and slowly soluble in propanediol. 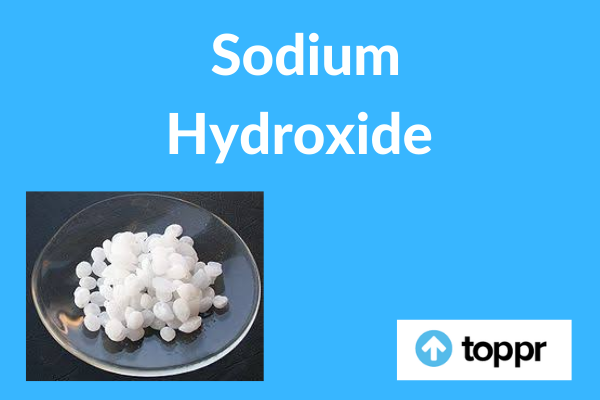 What is Sodium Hydroxide?

Sodium hydroxide is also known as caustic soda as it is made from a highly caustic base and alkali that decomposes proteins at ordinary ambient temperatures and should cause severe chemical burns. It’s highly soluble in water, and readily absorbs moisture and \(CO_{2}\) from the air. It forms a series of hydrates like \(NaOH.nH_{2}O\).

Sodium hydroxide is employed in many industries: within the manufacture of pulp and paper, textiles, beverage, soaps and detergents, and as a drain cleaner.

Physically unblended NaOH is a colourless crystalline solid. It’s melting point of 318 °C (604 °F), and a boiling point of 1,388 °C (2,530 °F). It’s highly soluble in water, with a lower solubility in polar solvents like ethanol and methanol. NaOH does not dissolve in ether or other non-polar solvents. It feels slippery with skin contact caused by the method of saponification that happens between NaOH and natural skin oils.

The viscosity of aqueous NaOH, like any liquid chemical, is inversely associated with its service temperature, i.e., its viscosity decreases as temperature increases, and the other way around. The viscosity of caustic soda solutions plays an immediate role in its application also as its storage.

Sodium hydroxide can form several hydrates \(NaOH.nH_{2}O\), which end in a posh solubility diagram. The known hydrates and therefore the approximate ranges of temperature and concentration (mass per cent of NaOH) of their saturated water solutions are as follows:

NaOH and its other monohydrate form orthorhombic crystals. It has the space groups Cmcm (oS8) and Pbca (oP24), respectively. The atoms are arranged during a hydrargillite-like layer structure \(/O Na O O Na O/\). Every NaOH atom is surrounded by six oxygen atoms, three each from hydroxyl anions \(OH^{-}\) and three from water molecules. The hydrogen atoms present within the hydroxyls form strong bonds with oxygen atoms within each O layer.

This type of reaction with a robust acid releases heat and hence is exothermic.

Sodium hydroxide also reacts with acidic oxides, like sulphur dioxide. Such reactions are often wont to “scrub” harmful acidic gases (like \(SO_{2}\)  and \(H_{2}S)\) produced within the burning of coal and thus prevent their release into the atmosphere. For example,

Reaction with Metals and Oxides

Sodium hydroxide is usually in use for the hydrolysis of esters like amides and alkyl halides. Despite solubility in propanediol, it’s unlikely to exchange water in saponification thanks to the propanediol primary reaction with fat before reaction between caustic soda and fat.

For industry purpose, sodium hydroxide is produced as a 50% solution by variations of the electrolytic chloralkali process. Chlorine gas is an added product during this process. Solid caustic soda is obtained from this solution by the evaporation of water. Solid NaOH is most ordinarily sold as flakes, prills, and cast blocks.

Historically, NaOH has been produced by treating washing soda with lime during a metathesis reaction which takes advantage of the very fact that NaOH is soluble, while carbonate isn’t. It is in use while purifying the bauxite ore from which aluminium metal is extracted. This process is the Bayer process.

1)Sodium hydroxide is a popular strong base utilized in industry.

2)NaOH is in use in the manufacture of sodium salts and detergents, pH regulation, and organic synthesis.

3)In bulk, it’s most frequently handled as a solution.

4)Within the petroleum industry, caustic soda is employed as an additive in drilling fluid to extend alkalinity in bentonite mud systems, to extend the mud viscosity, and to neutralize any acid gas.

5)is in use for creating soaps and detergents.

6)It also helps in creating artificial textile fibres (such as Rayon) and in the manufacturing of paper.

7)56% of caustic soda produced is employed by industry, 25% of which is employed within the paper industry.

8)Its use has a high demand for de-greasing metals, oil refining, and making dyes and bleaches.

Careful storage is required when handling caustic soda to be used, especially bulk volumes because it may cause chemical burns. For small-scale laboratory use NaOH is usually stored in bottles, intermediate bulk containers (medium volume containers) for cargo handling and transport, or within large stationary storage tanks with volumes that may extend up to 100,000 gallons for manufacturing or wastewater plants with extensive NaOH use.

Answer – Sodium hydroxide is a white crystalline odourless solid under normal room temperature and it absorbs moisture from the air. It is a manufactured substance. When NaOH mixes in water or being neutralized with acid it emits substantial heat, which sometimes is sufficient to ignite combustible materials.

Answer – Sodium hydroxide at higher concentrations can cause burns and ingestion can cause damage to internal organs although this is mainly an issue at a concentration of 1 M or greater.

Q.3. Why aluminium containers are not suitable to store sodium hydroxide solution?

Answer – As a chemical aluminium is more reactive than sodium. Hence, displacement reaction takes place and aluminium displaces sodium from sodium hydroxide and small pores are formed on the container.